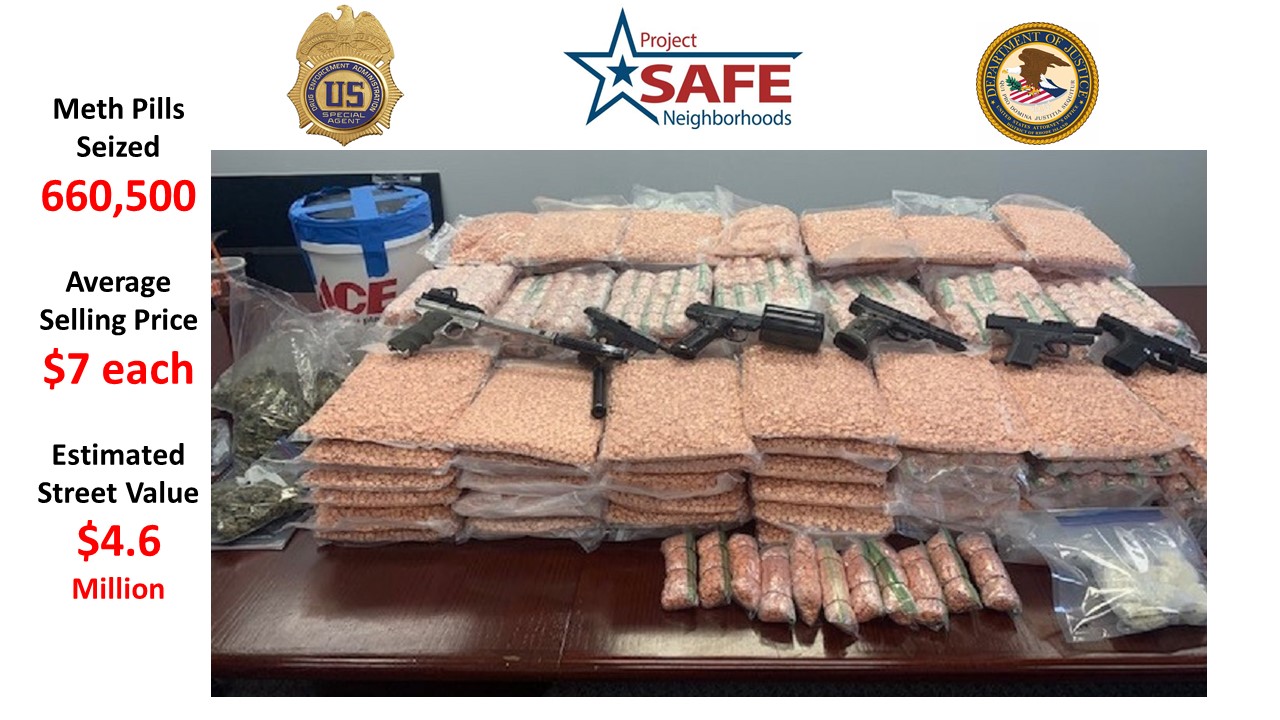 PROVIDENCE – According to documents unsealed in federal court in Rhode Island, a Rhode Island man has agreed to plead guilty to possession with intent to distribute 500 grams or more of methamphetamine in connection with the seizure of approximately 660,500 methamphetamine-laced counterfeit Adderall® pills, the largest known seizure of its kind in the country, announced United States Attorney for the District of Rhode Island Zachary A. Cunha.

27-year-old Dylan Rodas has been detained in federal custody since his arrest on March 28, 2022, as an expansive Project Safe Neighborhoods investigation continues following the seizure of approximately 660,500 methamphetamine-laced counterfeit Adderall® pills, weighing a total of approximately 660 pounds; approximately even kilograms of methamphetamine powder; 1,000 fake Oxycodone fentanyl-laced pills; two motorized pill presses; 250 grams of cocaine; $15,000 in cash; and seven handguns, including two “ghost guns. This is believed to be the largest seizure of counterfeit Adderall pills to date, and among the largest single methamphetamine seizures by DEA’s New England Field Division.

In remarks delivered today at a press conference to announce the seizure, criminal information, and plea agreement, United States Attorney Zachary A. Cunha remarked that “the quantity of methamphetamine represented by this seizure – methamphetamine that was packaged and ready to flow out onto the street, to devastating effect in our communities – is staggering.”

Addressing the burgeoning trafficking of methamphetamine into Rhode Island and New England, United States Attorney Cunha commented that, “…for a long time, we here in New England have been spared the full impact of methamphetamine, a drug that has blighted lives in so many other communities across the country. Those days, I regret to say, are over, with meth increasingly making its presence felt in Rhode Island and across the Northeast.” Mr. Cunha added, “This prosecution, which involves the seizure of what I can only term industrial scale quantities of meth, is a wake-up call that we cannot be complacent- that we cannot treat meth as a problem that happens elsewhere.”

“DEA is committed to investigating individuals like Mr. Rodas who are responsible for distributing lethal drugs, like the fake pills containing methamphetamine in this case, to the citizens of Rhode Island,” said DEA New England Division Special Agent in Charge Brian D. Boyle. “Illegal drug distribution ravages the very foundations of our families and communities so every time we take methamphetamine off the streets, lives are saved. This investigation demonstrates the strength of collaborative local, state and federal law enforcement efforts in Rhode Island and our strong partnership with the U.S. Attorney’s Office.”

The case is being prosecuted by Assistant United States Attorney Stacey P. Veroni.