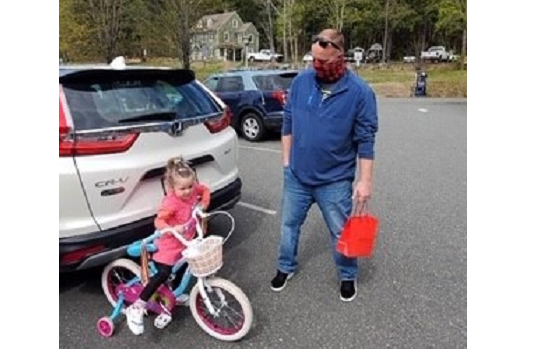 A Massachusetts State Trooper couldn’t let a little girl be sad for long.

According to Massachusetts State Police, Trooper Jim Burke, who is assigned to the State Police – Milton Barracks, responded to the Blue Hills Reservation to take a report of a missing bicycle.

When Burke arrived on scene, he learned that a young girl and her family were visiting the Houghton’s Pond area at the time.

While there, the family left the girl’s bicycle at the pavilion as they walked the beach area.

When the family returned to the pavilion, they found that the bicycle had been stolen and the young girl was devastated.

After having a conversation with the family, Trooper Burke offered the girl a bike he had at home which his daughter had outgrown.

The family was ecstatic and accepted the offer.

As you can see, the girl was so excited as she took her new bike for a ride thanks to Trooper Burke.

Hats off to a MSP Trooper going the extra mile!