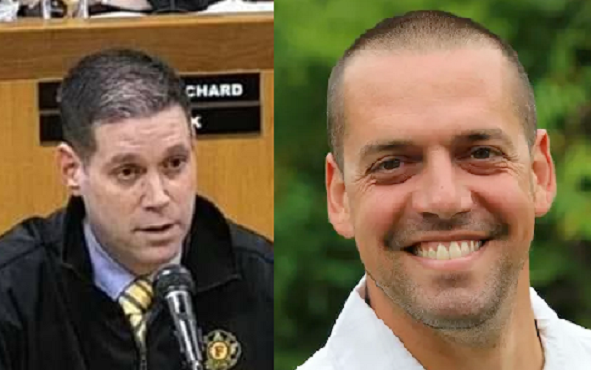 The President of the Fall River Firefighters union has announced he did not run for re-election as a new president has been announced.

Jason Burns, President of Fall River Firefighters Local 1314, has decided to step down in a post on social media. Burns was hired in October of 2006, elected to the executive board on 2010, elected Vice President in 2011, and elected President in 2012.

It is clear in his statement, and in talking with Burns, that the decision was not easy.

“The time has come. This is not an easy post for me but it is an important one.”

“As of January 1st I will no longer hold the office of President of Fall River Firefighters Local 1314. I have decided not to seek re-election. Many thought I’d hold the position until retirement, but to myself, I always knew I’d rather leave too early than too late….and here I am…leaving too early.”

“It has been one heck of a journey and the absolute greatest honor and privilege to represent the men and woman of our local. Truly the privilege of a lifetime.”

“I’m proud of the work we accomplished together. The FRFD was decimated by unscrupulous politicians of the past. Safety was an afterthought. Our members paid for their own safety equipment…apparatus were decrepit…life saving breathing equipment was obsolete and our membership was forever dwindling….Morale was soooo far in the tank!”

“Today, though far from perfect, L1314 is in a much safer place than it was when I was initially elected President. OUR community has benefitted greatly from this partnership.”

“I certainly didn’t do it alone. I had some gigantic union figures advising me and teaching me the ropes…I’m hesitant to name names because I will ABSOLUTELY miss people….BUT…I would be remiss if I didn’t thank Mike Mullane, Edward Kelly, Jay Colbert, Bob McCarthy, Jim Allen, Billy Cabral, Steve Pex, Tommy Ross, Robert Hodnett, Tom Chippendale, Lionel Tetreault, Rich MacKinnon, Matt Reddy, Mike Murphy, Paul Medeiros, William Hill, Kaitlyn Shinney, Archie Gormley, Michael Papagni, and last but not least Leah Marie Barrault (and maybe most importantly) for giving me the tools to succeed when I first began and throughout my tenure. My goodness was I green and my goodness was I blessed to have a Mount Rushmore of union leaders to help develop my ability….no doubt GENERATIONAL leaders!”

“This post, though probably inadequate, is meant to THANK EVERYONE. Good bad or ugly you have meant SOOOOOO much to me. THERE ARE HUNDREDS of PFFM members who became great friends, mentors and the best of coaches. I’m sorry I haven’t named or tagged all of you…but…I hope you all know what you meant to me with or without this post…..I am GRATEFUL! Fall River residents and firefighters are safer today because you took the time to teach me the ropes.”

“I cannot end this post without expressing my gratitude for the local officials who stood shoulder to shoulder with me at so many levels…we didn’t always agree…yet…I am eternally grateful…you have had a dramatic influence on the safety of my membership and the community we serve. Carole Fiola, Alan Silvia, Paul A. Schmid, Michael Rodrigues, and especially my public safety champions on the city council beginning with my great friend Pamela Laliberte.”

“Lastly and most importantly, I would like to say thanks to my family and more specifically…the “Burns” girls. You all have sacrificed so much to allow me to have the time to focus on helping other people’s families. You hardly ever complained and always understood when I needed to leave or miss family events to handle my 2nd family’s issues. You continue to be the greatest influence and inspiration in my life, I hope I’ve made you proud. I love you all more than words. Liz, Taylor Burns, Madison Burns, Samantha, Abigail, and Emersyn.”

“Now I sit and evaluate what to do next. Rest seems like a good idea, but that is not realistic. How can I help my firefighters? How can I help firefighters across the state and nation? How can I maximize my influence on my community and the people I care so much for? So many questions….so many routes. Truth be told I will find my way to contribute to our community and I look forward to that answer.”

“Regardless….THANK YOU…THANK EVERYONE of you!!!”

According to Burns, LT. Joshua Hetzler has been elected president to succeed him.

“We have a great relationship and I look forward to supporting him and our local in any way I possibly can.”