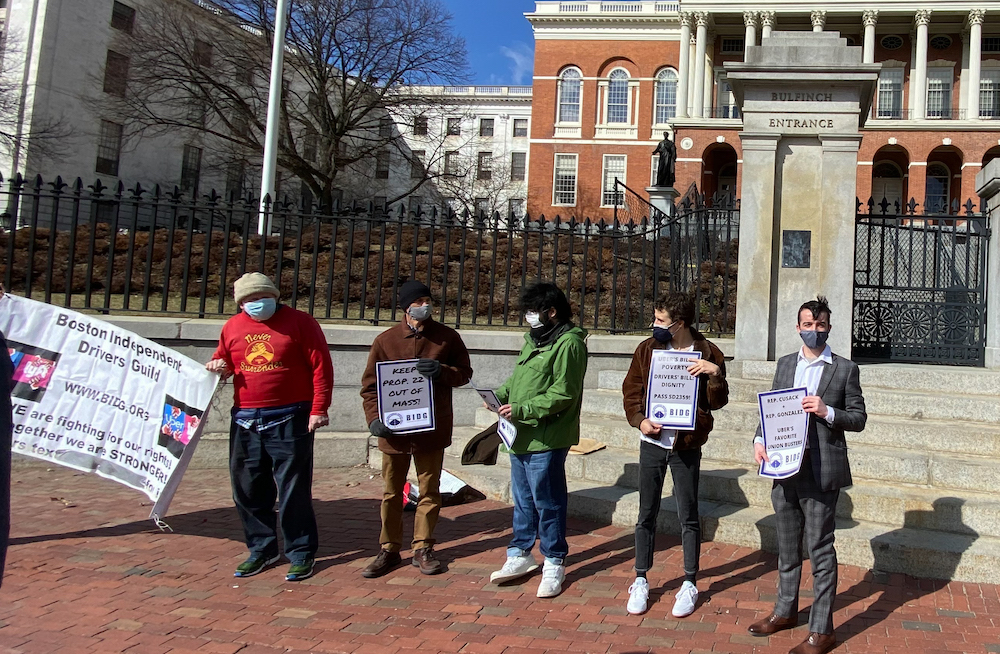 Representatives of a group representing around 800 rideshare drivers gathered outside the State House Thursday afternoon in support of legislation (SD 2359) that would set a minimum wage of $20 an hour for drivers and codify the right to unionize.

The event, which drew only a handful of people, was hosted by the Boston Independent Drivers Guild which is pushing the bill as a matter of “basic workers rights.” Henry De Groot, executive director of the group, said rideshare drivers are reliant on platforms like Uber, Lyft, Grubhub, and DoorDash to earn a living. “They set the terms and drivers just have to accept whatever they’re given,” he told reporters on the steps of the State House. “The situation has been deteriorating for years. Drivers who’ve been driving for seven, eight years have had their pay cut time and time again. They flood the platforms with new drivers. And during the Coronavirus, the misclassification issue went from an issue of worker rights to an issue of public safety.”

The gathering occurred a day after the Massachusetts Coalition for Independent Work formally launched with 12 initial members including Uber, Lyft, and Doordash. The coalition backs a bill (HD 2582) that would keep rideshare drivers classified as independent contractors and not employees. Conor Yunits, a spokesperson for the coalition, said drivers want to keep the flexibility that comes with the independent contractor classification. “The vast majority of drivers want the freedom to remain flexible and they do want additional benefits,” he told the News Service.

“That’s why we’re in favor of a compromise that will grant new benefits of protections to drivers while also maintaining that flexibility.” De Groot said Uber and Lyft “are very good at spreading propaganda so that they confuse people to think that taking the rights away is helping them.”

“What we believe is that if we can frame the issues directly on do you want to give drivers more money, basic worker rights, and a path of unionization — everybody supports them,” he said. “The classification issue is sort of a red herring and a distraction.”