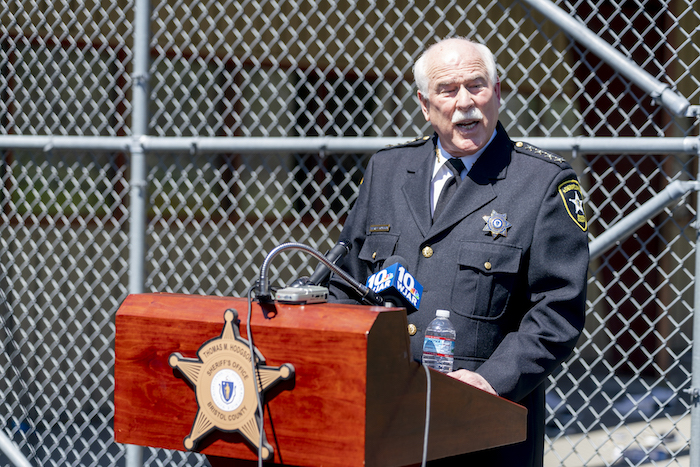 Following Massachusetts Attorney General Maura Healey’s December 15th report detailing her office’s investigation into the May 1st altercation between ICE detainees and Bristol House of Corrections (BCSO) staff, community advocates have joined together to call for the resignation of Thomas Hodgson.

In a report issued last week, the AG’s Office concluded that various institutional failures and poor decisions by BCSO leadership on May 1, 2020 culminated in a calculated use of force against the immigration detainees that was disproportionate to the security needs at that time and that unnecessarily caused or risked harm to everyone involved.

In response to the report, the group states that Hodgson must resign immediately as the violence against the detainees is not acceptable to them.

“This wasn’t an isolated incident,” said Marlene Pollock of Bristol County for Correctional Justice, which called for the investigation following the attack on May 1st. “His abuse of people he is responsible for has only gotten more glaring during the pandemic.”

“Essentially, I’d like to see Hodgson removed. Anything less is not sufficient. This isn’t the first time Hodgson has done something egregious. He continues to be a ‘bad actor,’ and serves the community poorly,” said LaSella Hall of the New Bedford NAACP.

Healey recommends in her report that the Department of Homeland Security immediately terminate the agreements that allow the BCSO to process and hold detainees from Immigrations and Customs Enforcement.

Said Elizabeth Murphy, Organizer with the local Immigrant Support Network, “The stress placed on the immigration system by the pandemic has only added to Hodgson’s power. “We need a change in BCSO administration now. Support from the MA State Legislature will be crucial in addressing the findings of AG Healy’s report, which must be a priority despite all of the other urgent issues at hand. Detained immigrants and their families should not be leaving in constant fear of violence. Massachusetts can do better, and our leadership needs to act now.”

“The report released Tuesday on her office’s investigation into the May 1 incident at the C. Carlos Carreiro Immigration Detection Center in Dartmouth is littered with baseless allegations and assumptions, and was clearly written and released to advance her long-documented anti-ICE, pro-illegal immigrant political agenda. Why would the AG’s staff interview community advocates but not ask Sheriff Hodgson a single question?”

“The corrections teams at the BCSO risked their lives to quell a violent altercation with criminal illegal aliens on May 1 and did so with the upmost professionalism. We stand by the response to the incident, and look forward to the results of the truly independent investigation currently being worked on by the Department of Homeland Security’s Office of the Inspector General.”