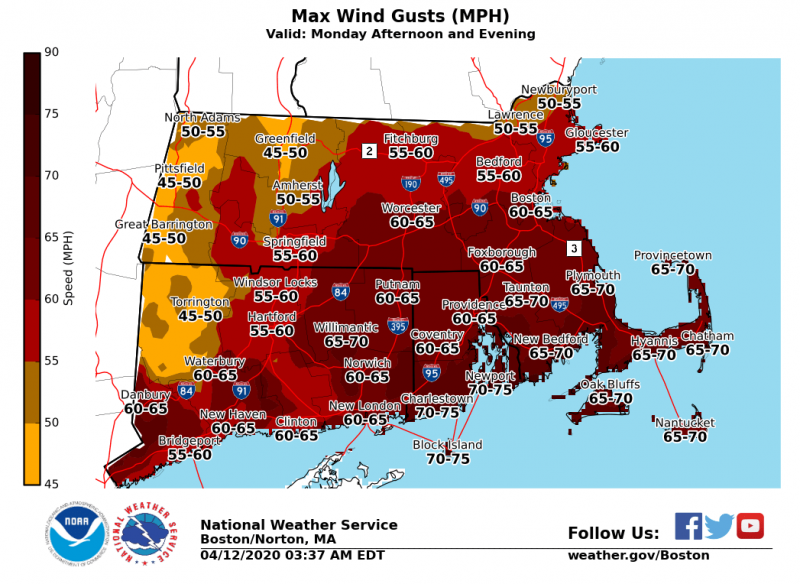 Strong winds with showers and possible thunderstorms are headed our way.

Damaging winds will blow down trees and power lines. Widespread power outages are expected. Travel will be difficult, especially for high profile vehicles.

The National Weather Service recommends people avoid being outside in forested areas and around trees and branches. If possible, remain in the lower levels of your home during the windstorm, and avoid windows. Use caution if you must drive. 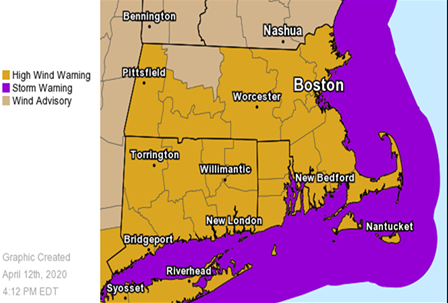 Tonight
A chance of showers, mainly after 4am. Mostly cloudy, with a low around 48. South wind 10 to 13 mph. Chance of precipitation is 30%. New precipitation amounts of less than a tenth of an inch possible.

Monday
Showers, with thunderstorms also possible after 3pm. Patchy fog before 4pm. High near 60. Breezy, with a south wind 16 to 25 mph, with gusts as high as 55 mph. Chance of precipitation is 90%. New rainfall amounts between three quarters and one inch possible.

Monday Night
Scattered showers and thunderstorms before 10pm, then isolated showers between 10pm and 11pm. Patchy fog between 7pm and 9pm. Otherwise, cloudy during the early evening, then gradual clearing, with a low around 45. Breezy, with a south wind 18 to 23 mph becoming west 9 to 14 mph after midnight. Winds could gust as high as 50 mph. Chance of precipitation is 50%. New precipitation amounts between a tenth and quarter of an inch, except higher amounts possible in thunderstorms