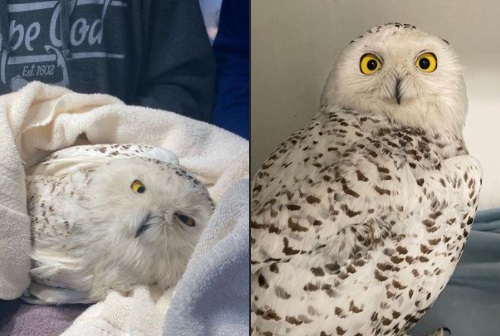 According to the New England Wildlife Center, this poor snow owl is lucky to be alive after he was pulled from the freezing ocean the other night.

While on the Cape, a local beachgoer’s dog alerted her owner that there was something struggling in the water. Upon closer inspection, she saw that it was in fact an owl, and it was in distress. Despite the freezing temperatures, this brave Good Samaritan jumped into the surf to retrieve him. She was able to pull him to safety and wrapped him in her sweater.

The woman then called the New England Wildlife Center, and they were able to get the owl into care immediately.

On admission, the vet team found the snow owl to be hypothermic and extremely skinny with some abrasions to his feet. NEWC quickly went to work stabilizing him by administering warmed injectable fluids, pain meds, and an easily digestible meal.

During the winter some snow owls seek more temperate climates and migrate down from the arctic. Many of them arrive completely depleted of energy reserves and need time to rest and refuel. The NEWC believes that this is what happened to the owl and perhaps got tangled in the surf while trying desperately to find a meal.

Representatives from the NEWC believe that the prognosis for the owl is good.

“We are cautiously optimistic that he was found in time, and we can get him back to flying condition. You can see in the second photo he is already feeling much better.”

The NEWC will continue to monitor the owl’s progress.