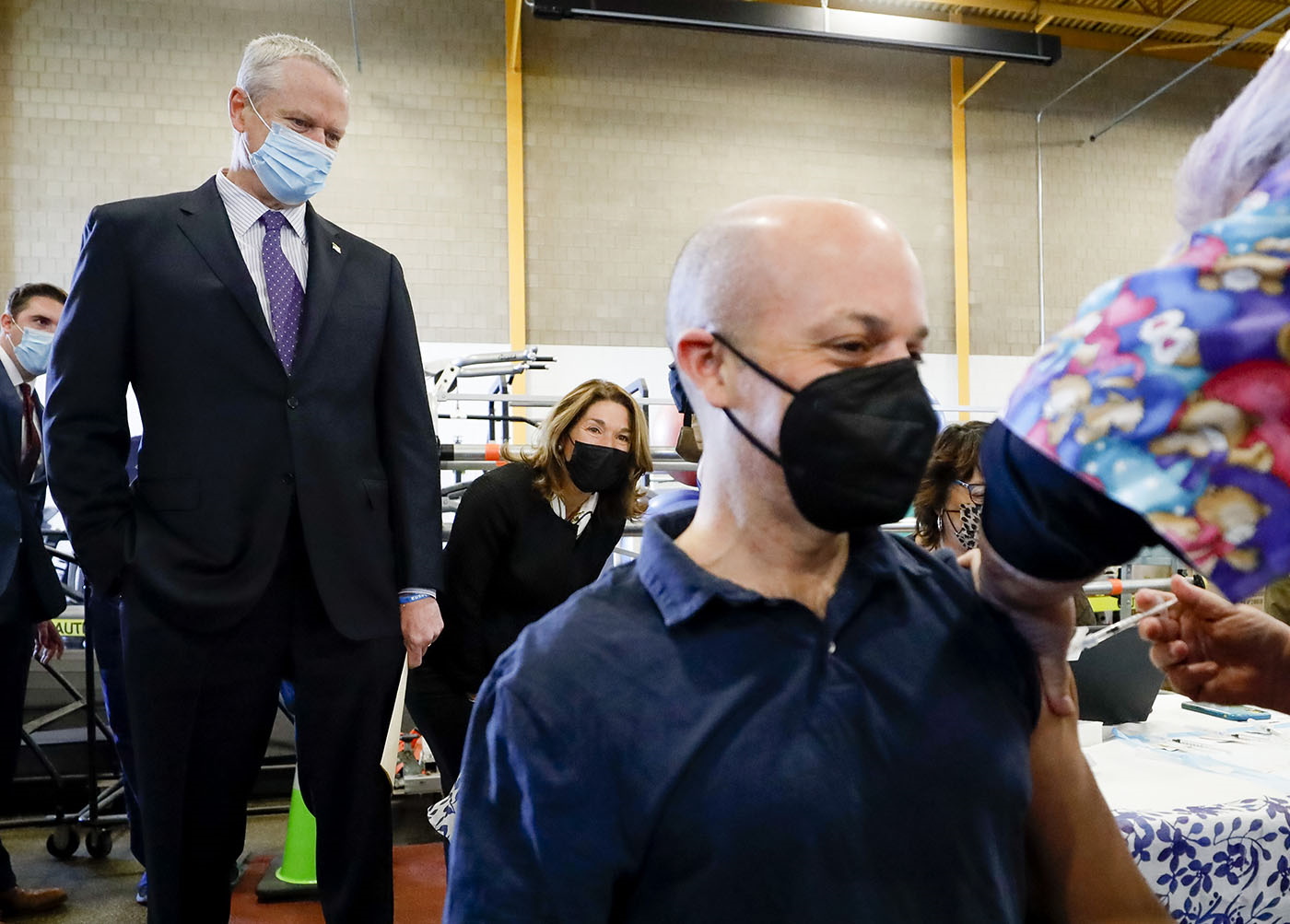 APRIL 22, 2021…..With states around Massachusetts beginning to loosen some of their personal and economic COVID-19 restrictions, Gov. Charlie Baker said Thursday that the state’s vaccination program remains his top priority, though he’ll likely have more to say about reopening by the end of the month.

New Hampshire last week dropped its public mask mandate, Connecticut announced plans to phase out all business restrictions by May 19 and new Rhode Island Gov. Daniel McKee said Thursday he would incrementally increase capacity limits for all businesses in the Ocean State until they are eliminated by Memorial Day weekend.

The last time the rules changes in Massachusetts was a month ago when large venues like Fenway Park were permitted to open at 12 percent capacity, and most businesses are still restricted to 50 percent capacity and no more than 500 people. Baker said he usually likes to wait two to three weeks before taking the next step forward, and has been monitoring the health data to make sure whatever comes next “doesn’t create a bounce in the wrong direction.”

Though daily case and test counts remain higher than many other states, Baker said the rate of hospitalization in Massachusetts is lower than any state on the eastern seaboard to Florida and across the Midwest to Minnesota.

“I expect we’ll have some stuff to say before the end of April, but at this point in time, I’m with the mayor. People need to continue to follow the rules and the guidance,” Baker responded when asked about reopening after a tour of a Berkshire regional vaccinate site with Pittsfield Mayor Linda Tyer.

Jon Hurst, president of Retailers Association of Massachusetts, recently argued that with Massachusetts among the national leaders in vaccinations the state should roll back all remaining business restrictions by Memorial Day.

Baker said Massachusetts received 348,000 first and second doses of vaccine this week, which he described as “basically flat” from last week, and he said he has begun to push the Biden administration to reallocate federal vaccine supply to Massachusetts from states that are having trouble using their full allotment.

“If you have folks who aren’t taking down the allocation that’s being made available to them, we here in Massachusetts would love to have that because we have people who want to get vaccinated,” Baker said.

The governor said the federal government hasn’t figured out how to react to vaccine supply outpacing demand in some parts of the country, but Baker said he planned to speak with the Congressional delegation next week about the issue.

“We’re going to continue to press on it,” Baker said.

Citing CDC data, Baker said Massachusetts has the lowest rate of vaccine hesitancy in the county, with fewer than 10 percent of residents in all counties in Massachusetts expressing reluctance to get vaccinated.

“People in Massachusetts are eager to get vaccinated,” Baker said.

The governor, however, said there are still communities where outreach needs to occur, including in hard-hit communities of color that the state has targeted with a $5 million public awareness campaign launched in February and a $30 million vaccine equity initiative that includes door-to-door canvassing.

The state plans this week to launch a new round of multilingual TV ads “to remind people that the vaccine saves lives and it is the best way to protect yourself, your loved ones, your co-workers and your neighbors,” Baker said.

The governor was at the Berkshire Regional Collaborative vaccination site in Pittsfield where Tyer said they’ve vaccinated 65,000 people. The collaborative has the capacity to administer 2,000 shots a day at each of its three locations in Pittsfield, Great Barrington and North Adams, but lacks the supply to meet that potential, the mayor said.

“Even if we don’t see much change in the federal supply we expect that everybody who wants a vaccine will get one, certainly by the end of June,” Baker said. “My hope and my anticipation is that we see some improvements in supply and that particular date can move up by a few weeks.”