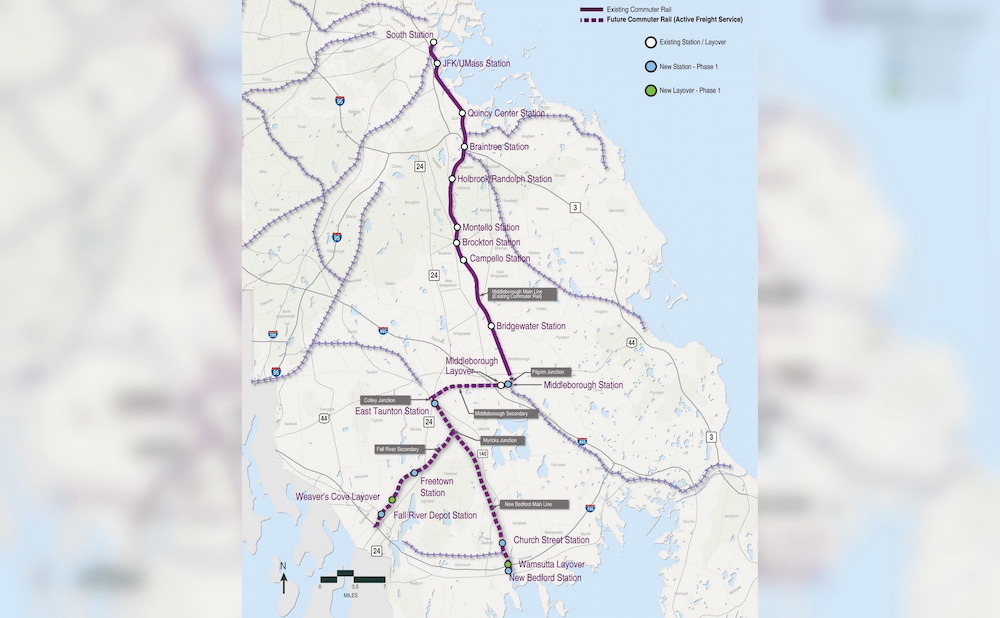 Sen. Michael Rodrigues can finally add a pair of scissors, not another shovel, to his South Coast Rail collection.

After decades of debate and several false starts, the Baker administration and MBTA announced Monday that construction is “substantially complete” on the first stretch of the commuter rail expansion, keeping the timeline on track to begin service to Fall River, New Bedford and surrounding communities by late next year.

The work to date has included construction of a new train station in Freetown, where officials gathered Monday to cut a ribbon and commend the project’s success so far. For Rodrigues and other lawmakers from the region, the progress was at once overdue and a bit disorienting.

“This is almost surreal for me,” Rodrigues said.

The Westport Democrat ran through a list of previous landmarks for the project. In 1990, Gov. William Weld visited Fall River and, as Rodrigues recalled Monday, “promised us ‘If I don’t deliver commuter rail to the South Coast, you can sue me.’ ” Rodrigues still has a chrome-plated shovel in his State House office, given to him by Gov. Paul Cellucci, commemorating the 1998 groundbreaking for a Fall River and New Bedford commuter rail line, as well as “the real groundbreaking shovel” from a 2019 event with Gov. Charlie Baker.

“While there have been six governors that have promised me and promised us that we’d have commuter rail to Fall River and New Bedford, it was Gov. Baker and Lt. Gov. [Karyn] Polito that actually delivered on those promises,” Rodrigues said. “I will never let people forget that it was through their hard work, through their commitment, that what we’re experiencing today, finally, getting 21st century public transportation to and from our capital city and these two great South Coast cities.”

It’s not the first time Rodrigues has heaped praise on a sitting governor for advancing the rail project. In 2014, when lawmakers sent Gov. Deval Patrick a $12.7 billion transportation bond bill that included money for South Coast Rail, Rodrigues said of prior groundbreakings, “Those were all political charades. It wasn’t until this administration went back to square one and did it right.”

The push for a passenger rail connection to population centers along the South Coast stretches back decades. Baker himself on Monday recalled discussing an expansion when he worked for Weld “in the early 1990s.”

Officials previously eyed extending the Stoughton Line southward to Fall River and New Bedford, but the cost estimate exploded in 2016, prompting the Baker administration to pivot to using the Middleborough/Lakeville Line as the foundation for the project.

Baker said South Coast Rail will make passenger trains accessible to “the only two major municipalities within 50 miles of Boston that didn’t have it.”

“In some respects, that’s the most fundamental issue of all: how are we going to claim to be an inclusive Commonwealth if the south coast of Massachusetts, and Fall River and New Bedford in particular, that was available, as I said before, to all the other communities within 50 miles of Boston of any particular size?” he said.

Construction on the $1.05 billion first phase of the project began in 2019.

“The governor has asked me not to sing, but in the spirit of the holiday, I’m going to give you a quick — it’s not ’12 Days of Christmas,’ but it’s ‘Almost 12 Things About South Coast Rail,'” MBTA General Manager Steve Poftak said at Monday’s event. “We’ve rebuilt 12 miles of track, we’ve rebuilt 11 culverts, 10 grade crossings have been constructed, we’ve done work on nine bridges, built two brand-new stations and we built one new layover facility on this Fall River branch, and we’ve done it on time and we’ve done it on budget.”

Before passenger service can begin, work still needs to be done to finish installing signal boxes along the right of way, then to test and commission all new equipment that will be deployed, according to an update the T produced in November.

The MBTA also has a $403.5 million contract ongoing to extend the Middleborough secondary line through Taunton and into New Bedford. Once completed, that line will feature four new stations.

Poftak said work on that part of the project will continue through the winter, and officials expect that riders can begin accessing both South Coast Rail segments by the end of 2023.

The T in 2019 also awarded a $278.5 million contract to purchase 80 bi-level coaches, 16 of which will go specifically toward South Coast Rail. Baker said the full slate of 80 new trains will boost capacity on the commuter rail network by about 14,000 seats, a significant upgrade as ridership rebounds from pandemic-era lows.

Like Rodrigues, both Mattapoisett Rep. William Straus — who co-chairs the Transportation Committee — and Fall River Rep. Carole Fiola described the ribbon-cutting at the new Freetown commuter rail station as “surreal.”

“They said that the royal visit was probably the most exciting event to happen in Massachusetts this year, but for me and for us here, it is this day,” Fiola said.

Monday’s event was a bit of a victory lap for Baker and Poftak, who will both leave office in early January and hand the reins to Gov.-elect Maura Healey and whomever she selects as the next leader of the MBTA.

They have faced immense criticism in the past year in particular amid a string of high-profile MBTA failures, unreliable service and a critical federal investigation that found myriad safety failures at the agency.

The T will need to navigate the added demand of running trains to South Coast cities with ongoing workforce shortages that have already prompted service cuts.

South Coast Rail is also not the only major T expansion the pair helped get close to or over the finish line after years in limbo. The first leg of the Green Line Extension opened to riders in March, and the second and final portion of that $2.3 billion project will begin running in one week.