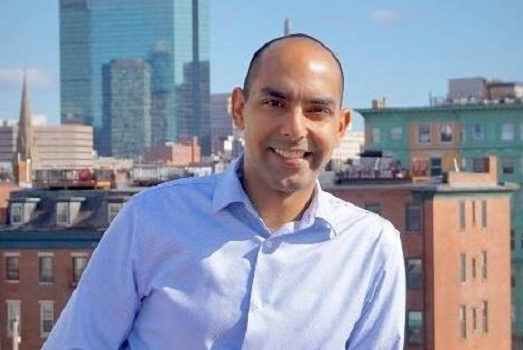 Emergency room physician and state Rep. Jon Santiago said Friday that Massachusetts still has a “rough couple of weeks ahead” dealing with COVID-19 and on Sunday said “we’re nowhere near seeing the end of this virus.” But Santiago does see Massachusetts as slowly climbing past the surge.

“As long as we’re testing and we’re doing the proper contact tracing my guess is that we’ll be on the backside of this virus hopefully in the next couple of weeks,” he said Sunday during an appearance on WCVB’S “On the Record” with Ed Harding and Janet Wu. He said he draws hope from seeing 35 COVID-19 patients per day being discharged from Boston Medical Center and from seeing the state Legislature pass important COVID-19 laws.

As for reopening parts of the economy, Santiago said the focus need to remain on the public health crisis and avoiding as many deaths as possible. “The virus is really going to dictate the opening,” he said, adding that communities of color have been disproportionately hit and “hit hardest” by COVID-19.

Also, the number of patients visiting emergency rooms during the crisis has been “significantly slower” than presumed at the start of the outbreak, Santiago said, with volume decreases of 40 to 50 percent. However, the patients who are coming in are older and “quite sick,” he said, and include patients arriving a week after being diagnosed with COVID-19 and in need ventilators or intensive care.

Ventilator availability was a topic of intense discussions early in the outbreak. Now, Santiago said, he believes Massachusetts has enough of the devices “to see us throughout the pandemic.” Calling ventilators “scary things,” Santiago cautioned that the putting someone on a ventilator or breathing tube alone is a risky procedure that may expose a patient to pneumonia. Fifty to 80 percent of people put on ventilators “don’t often get off ventilators,” he said.

Congress and President Donald Trump have so far agreed to four COVID-19 laws that allocate nearly $3 trillion and Congressman Richard Neal on Saturday said another major bill, known as “Phase 4,” is in the works. Washington, Neal said, has often bridged historic partisan divides during the crisis.

Santiago called the federal government’s crisis leadership “abysmal” and said partisanship in Washington was “horrendous.” He singled out President Donald Trump. “His inability to communicate important scientific knowledge is concerning to a lot of us,” Santiago said.