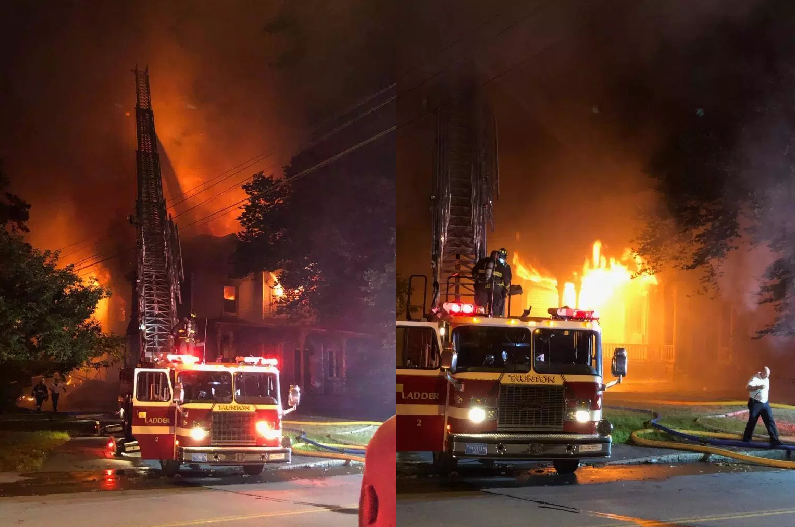 TAUNTON — Chief Timothy Bradshaw reports that the Taunton Fire Department is responding to a large fire at a multi-family home on Harrison Street Tuesday night.

The first responding firefighters used a ladder to rescue a man from a second-floor balcony as the fire burned close by. The man’s condition is unknown at this time but he was conscious and alert at the time of rescue and did not require medical assistance.

At approximately 8:20 p.m., the Taunton Fire Department was called to 46 Harrison St. for a report of a house fire.

Upon arrival, firefighters saw large flames and heavy smoking coming from the second floor and roof of the 2.5-story wood-frame home.

Incident commander Deputy Chief Eric Dumont, quickly called for all available Taunton Fire apparatus to respond to the scene and struck a second alarm for fire departments from surrounding communities to respond. The Raynham, Dighton, Norton and Rehoboth fire departments were providing assistance.

As the fire continued to quickly spread throughout the 6-apartment building, Chief Bradshaw struck a third alarm, seeking additional manpower at the scene.

As of approximately 10:30 p.m., the roof had collapsed into the building and crews were still battling the fire. There are about 35 firefighters, eight engines and two ladder trucks on scene at this time.

All residents of the home are believed to have made it out of the building safely. All residents will be displaced as a result of the fire and the Taunton Emergency Management Agency was responding to the scene to assist.

One Taunton firefighter was treated at the scene for a heat related condition and is expected to be okay.

Harrison Street and Winthrop Street (Route 44) will both be closed while the scene remains active. The Taunton Police Department is on scene assisting and directing traffic.

The scene is expected to remain active for several hours and residents and drivers are asked to seek alternate routes.

The Taunton firefighters that rescued the man from the balcony were Tony Burton, John Gulan and Sarah Riendeau.