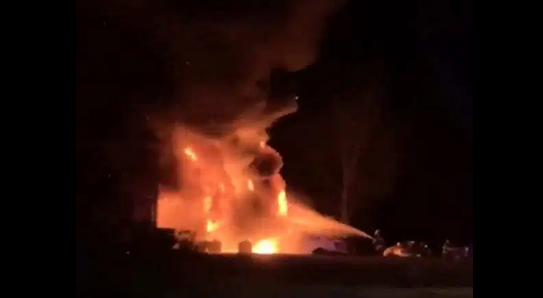 The Dighton Fire Department and Dighton Police units responded to 444 Lincoln Ave. at 6:06 p.m. on Thanksgiving for a report of a fire in a single family home with an attached in-law apartment. Upon arrival, first responders had smoke and fire showing from the garage, and fire crews immediately went to work. A full working fire assignment was ordered, sending fire crews from Rehoboth and Taunton to the scene.

Crews were able to knock the fire down, but extensive overhauling was needed. The residents are unable to return home and are staying with family in the area.

No one was injured.

Lincoln Avenue was shut down during the firefighting effort and is not expected to re-open until late Thursday evening.

The Special Signal Fire Association / Providence Canteen also responded to the scene, and the Berkley Fire-Rescue Department provided station coverage for Dighton during the incident.

The origin and cause of the fire are under investigation by the Dighton Fire Department.