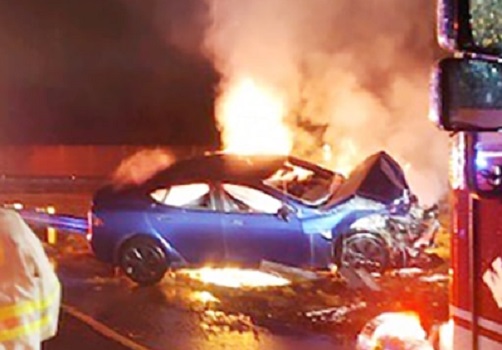 According to Provisional Fire Chief Tom Purcell, just after 10:45 p.m., the Wakefield Fire Department and Massachusetts State Police responded to a single-vehicle crash in the northbound lanes of I-95 near Exit 59.

Upon arrival, companies led by Capt. John Walsh, found a Tesla electric vehicle wedged onto the guardrail in the right breakdown lane. The 38-year-old driver of the vehicle declined medical attention at the scene.

As the vehicle was being prepared for removal from the scene, the guardrail pieced the undercarriage, causing the lithium-ion batteries to go into a thermal runaway. The vehicle became fully involved in fire.

A full box alarm assignment was ordered per Shift Command, and a Lynnfield engine company was called to the scene as well. Wakefield Engine 1 and Ladder 1 initiated suppression operations, applying copious amounts of water onto the vehicle.

Multiple surrounding mutual aid communities responded as well to support firefighting operations and to create a water shuttle to bring water continually to the scene. Engines from Melrose, Stoneham, Reading, Lynnfield as well as a Middleton water tanker assisted.

Firefighters had three 1 3/4inch hand lines as well as a “blitz gun” in operation to cool the battery compartment.

The fire was declared under control and fully extinguished after about 2 1/2 hours. More than 20,000 gallons of water were used.

A Department of Fire Services Hazmat Team responded and the Department of Environmental Protection was notified. The vehicle was removed from the scene after consulting with the Hazmat Unit.

The Saugus Fire Department’s Engine 1 covered Wakefield fire headquarters during the incident. Massachusetts State Police controlled traffic, with flow diverted to one lane in a driving snow storm at the height of operations.

“As sales of electric and hybrid vehicles increase, the fire service is continuing to modify our tactics to properly respond, protect property and firefighters as well as control these types of fires,” said Provisional Chief Purcell. “Fighting vehicle fires is inherently dangerous. When responding to an electric or hybrid vehicle fire there are additional challenges responding crews must consider. Fire companies on the scene of an electrical vehicle fire should expect longer time frames to manage and control EV vehicle fires, ensure that large, continuous, sustainable water supply is established, as well as maintain heightened situational awareness and prepare for secondary fires.

“The crews did a great job, especially in the middle of storm conditions – on a busy highway. All responding mutual aid companies from the surrounding communities that assisted were fantastic and greatly helped the Wakefield Fire Department in controlling the incident.”