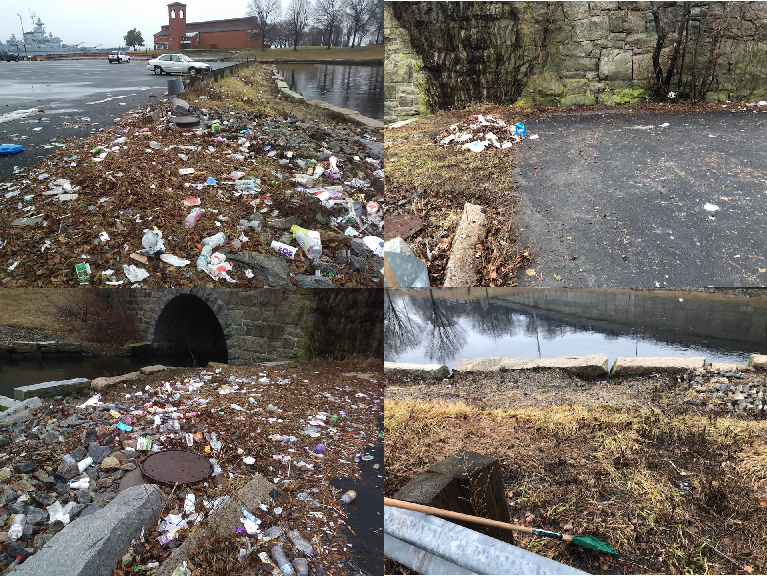 On Thursday, a concerned citizen, Kathy Correia, noticed that there was a pile of trash lining the Battleship Cove parking lot. Using a post on Facebook, she was looking to see how this iconic tourist attraction could get cleaned up and who was responsible. Some pointed out that the barrels in the area needed to be cleaned out more often because they are always full. Others mentioned how residents need to take more pride in their city. While the area is technically the state of Massachusetts’ responsibility to keep clean and it is unclear how the garbage got there, that didn’t stop Fall Riverites from taking action.

On Friday morning, Suzanne Texiera went down to Battleship Cove to assess the situation. She ran into a DCR worker who mentioned that two of his workers were laid off and his work truck was taken away. That is when she took it upon herself to resolve the issue. “I use this park to walk my dog Duke and enjoy the wildlife. I’m currently unemployed and wanted to do something that was worth while and beneficial then just collecting unemployment.”

Suzanne wasn’t born in Fall River. She is originally from Carver and spent her teenage years in Maine. She was compelled, however, to keep her current community clean. Especially a tourist attraction as popular as Battleship Cove. Suzanne is also the person who found the ring we posted on Friday. It was between the rocks and the water. The ring is currently at the Fall River police station.

As worthy as Suzanne’s efforts were on Friday, she was not alone in the cleanup effort as Saturday morning a group led by Trott Lee helped finish the job.

When people want to criticize Fall River folks for not having pride in their city, there are a few residents that would beg to differ.