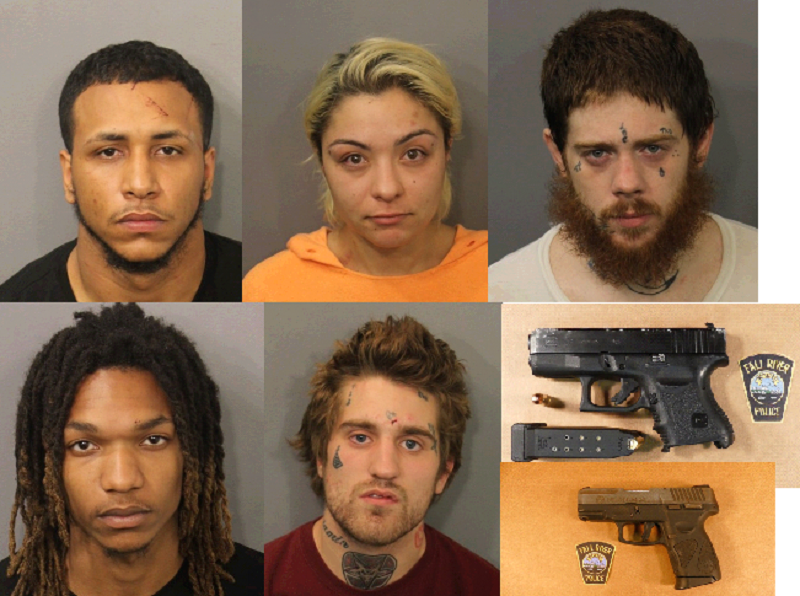 The Fall River Police Department made five arrests related to two drive-by shootings and an armed robbery which were ‘targeted acts of violence’.

On Friday, June 22nd, 2018, at approximately 2:09 am, Fall River Police Department Uniform Division Officers were dispatched to the 100 block of Pine Street near North Main Street in regards to a ‘shots fired’ call.

Witnesses stated friends had gathered outside on the sidewalk and were having a good time when they heard the sound of a car driving by and then the sound of gunshots. The vehicle was described as a small compact four-door sedan.

On Wednesday, June 27th, 2018, at approximately 2:00 am, an armed robbery occurred near the parking lot of Save-A-Lot on Griffin Street. A 34 year old female stated to Detective Richard Aguiar that cash was taken from her when a male pointed a handgun at her head. The female gave a description of the suspects and vehicle.

Also on Wednesday, June 27th, 2018, at approximately 2:30 am, a drive-by shooting occurred on Water Street. A Shot was fired toward an occupied vehicle. The 24-year-old male victim gave a description of the vehicle and suspects. While securing the scene for evidence collection, Sergeant Kevin Dolan observed a similar vehicle pass by. Officers attempted to stop the vehicle but it fled from the area eventually crashing in the area of Queen and Bay Streets. As a result of the crash, Uniformed Officers were able to chase down and apprehend two suspects in rear yards. Darius Seldon age 19 was apprehended by Officers Bruce Oliveira and Marc Correia while Kelvin Manual Cruz age 22 was apprehended by Officers Derek Oagles and David St. Laurent. Through follow up interviews conducted by Detectives John McDonald and Richard Aguiar and canvassing of the area, the firearm used in the Armed Robbery and the Water Street shooting was located on Ferry Street.

Further investigation led to the arrest of Joseph Dearth age 26, Tanisha Ibay age 25, and Zachary Kelly age 23 for their involvement in the June 22nd, Pine Street shooting. Cruz is charged with the both the Armed Robbery and the June 27th, 2018 Water Street shooting.

Officers from the Uniform and Special Operations Division, along with Detectives from the Major Crimes Division and Vice Units contributed to these arrests and the seizure of two firearms involved in these three incidents.

This incident is still under investigation by Fall River Police Departments Major Crimes Division (MCD). Anyone with information is asked to call MCD at 508-324-2796 or call anonymously on the TIPS line at 508-672-TIPS(8477).

Arrests are as follows:

Zachery J. Kelly age 23 LKA 168 Almond Street Fall River was charged with Armed Assualt with Intent to Murder, Assualt and Battery by Discharging a Firearm, Possession of a Large Capacity Firearm and numerous other firearms-related offenses