A Fall River man has been arrested on several charges after fighting staff at a Massachusetts restaurant.

According to Boston Police, at approximately 6:20 p.m. on Thursday, officers assigned to District C-6 (South Boston) responded to a radio call for a fight at 100 Pier 4 Boulevard (Ocean Prime Restaurant). Upon arrival, officers spoke with witnesses who stated Jason Wages, 29, of Fall River, and three others were having dinner at the restaurant when Wages began harassing female waitstaff as well as customers.

Staff members confronted Wages and he head butted an employee and called him a racial slur several times. Wages then head butted a second employee, and spit at a third employee before leaving the establishment. While exiting, Wages threatened to shoot “everyone in the place”.

According to witnesses, Wages grabbed his keys from the valet and fled the scene striking a motor vehicle. Several officers responded to the scene and were informed by a witness that there was a motor vehicle crash at 316 Northern Avenue at the Boston Public Works Building. Officers responded and located an unoccupied vehicle that had struck the building and damaged the gas line.

A witness approached officers and informed them that two males were seen fleeing on foot carrying garbage bags. Officers located Wages at 22 Drydock Avenue and the second individual was located in the parking garage at 12 Drydock Avenue. Officers located and seized two large garbage bags containing 53 large heat-sealed bags of marijuana as well as $8,600.00 in United States Currency.

Wages was placed under arrest and charged with Possession with Intent to Distribute Class D, two counts of Assault and Battery, and two counts of Leaving the Scene Property Damage. The second individual was FIO’d and released.

Wages is expected to be arraigned in South Boston District Court. 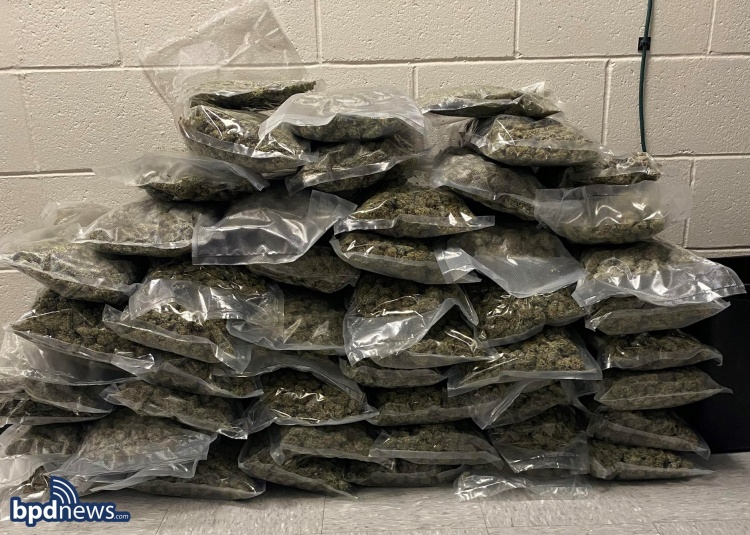