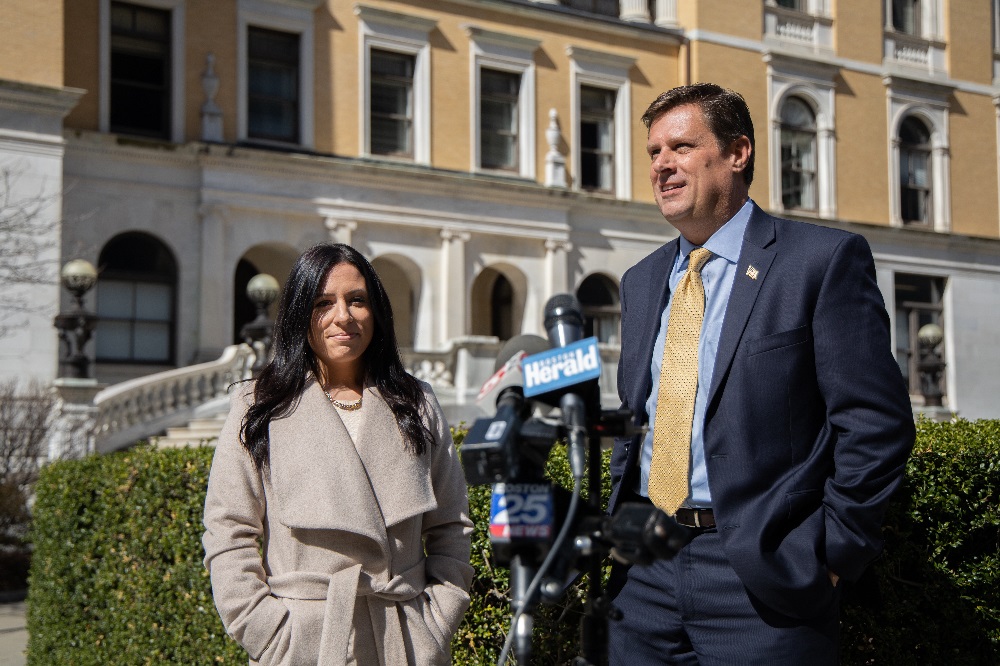 SEPT. 28, 2022…..Republican candidate for governor Geoff Diehl on Wednesday made a bid to ensure the high costs of living and doing business in Massachusetts are near the center of this year’s gubernatorial contest, pledging to provide tax relief, increase natural gas pipeline capacity into the state and to at a minimum put a “temporary freeze” on some clean energy policies to help residents and businesses cope with high costs.

Diehl’s focus on the high costs facing Massachusetts businesses and families during a press conference in Boston with running mate Leah Allen came just before the Mass. High Tech Council kicked off an event on the Bay State’s competitive position with CNBC’s Scott Cohn, who gave Massachusetts an “F” grade for both the cost of living and the cost of doing business in CNBC’s America’s Top States for Business and ranked it 24th among all states for business.

“The stock markets continue to drop, lost $10 trillion in the last quarter. Interest rates and mortgage rates are surging, inflation is at its highest rate in 40 years, food and gas prices significantly higher than two years ago. This is the backdrop that we’re dealing with and now, an energy crisis. And the state’s dragging its feet on returning $3 billion to taxpayers. The Legislature spent $4 billion of pandemic relief money on pet projects instead of relief … at the pump,” Diehl said outside the State House. “There’s a ballot question now that will add an additional 4 percent tax on high earners in the state, causing likely a further exodus of people and capital investment.”

The proposal on this November’s ballot to amend the state Constitution to impose a 4 percent surtax on annual household income above $1 million is one of the most glaring differences between Diehl and his gubernatorial rival, Democrat Maura Healey. Diehl opposes the surtax and says it would put Massachusetts at a disadvantage against other states, but Healey supports it as a way to raise more revenue for education (one of the state’s competitive strengths) and transportation infrastructure (one of its competitive weaknesses).

Outside the State House on Wednesday morning, Diehl pointed out how Healey opposed efforts as attorney general to expand natural gas pipeline capacity in Massachusetts — something that could eventually bring energy prices down but possibly at the expense of the state’s carbon emissions reduction requirements. He said he would work to bring those pipelines into Massachusetts and that he would “if not roll back at least take a temporary freeze on” initiatives that he says make ratepayers unable to afford to heat their homes.

“We’re subsidizing a lot of the renewable energies like wind and solar. I think Massachusetts has been providing a lot of tax credits and of course land for those turbines to be deployed. We need to make sure that those energy companies are also understanding that right now may not be the best time for them to take advantage of those tax credits, while we’re in an energy crisis,” he said.

Energy companies have secured rights to offshore tracts through a bidding process orchestrated through federal auctions. The climate law that Gov. Charlie Baker signed last month includes a major new offshore wind industry investment program and a related offshore wind tax incentive program worth up to $35 million a year, but neither program has yet been funded.

Healey’s campaign website says she “believes the best way to help families dealing with high costs right now is by making meaningful investments while also putting money back in people’s pockets.” She and Diehl largely agree on one immediate form of tax relief — both candidates used their primary night victory speeches to call for the state to quickly return excess tax fiscal 2022 tax collections under the 1986 law known as Chapter 62F.

Healey’s plan for additional relief from the high cost of living revolves around a child tax credit proposal that would provide $600 per child to more than 700,000 families. A family with two dependents that previously received up to the maximum of $480 through the dependent care tax credit would receive $1,200 in tax relief under Healey’s plan, her campaign said.

“I think we ought to consider that for residents here in Massachusetts, because this is a big hit,” she said at a campaign stop in Boston last week. “It obviously points to the need for us to be away from natural gas and a dependence — and a reliance there. So we need to keep moving forward on that front, but I recognize the very real hurt that families are going to be experiencing over the course of the winter and that’s why I encourage them to pursue payment plans and options.”

How Does Massachusetts Stack Up?
“Massachusetts is always in the hunt. It’s a very competitive, innovative state and that has served you very, very well,” Cohn, of CNBC, said Wednesday as he detailed his latest America’s Top States for Business rankings for the Mass. High Tech Council.

The Bay State came in 24th in the CNBC rankings for 2022, which are based on 88 metrics in 10 broad and weighted categories of competitiveness.

Massachusetts has bounced all around the rankings as each year considers a slightly different set of criteria — it has been ranked as high as fifth on the list (2010) and as low as 28th (2012), Cohn said. This year’s rankings gave extra weight to things like child care accessibility, career education and cryptocurrency mining, which Cohn said helped bump Massachusetts down from its spot at number 14 on the 2021 list.

“The weaknesses are cost: cost of doing business, highest wages in the country, you have high utility costs. We look at office and industrial rents and the tax climate. Cost of living, similar issues. For the infrastructure, as I said, this is a perennial issue with Massachusetts. You have the nation’s fourth longest commute, that’s statewide average,” Cohn said.

Massachusetts’ ranking, he said, was dinged by the fact that 27 percent of the participants in state workforce training programs were still not employed after six months. “That’s among the worst records in the nation,” he said. The ranking also took a hit by virtue of Massachusetts being 36th in the country in terms of licensed child care facilities per capita, which was given extra consideration as a major obstacle to getting people back into the workforce.

Other participants in the High Tech Council’s event Wednesday said they were especially concerned about the message that state tax policy — both enacted and proposed — sends to businesses.

“You can debate the philosophy of a tax. You can debate and it’s a vibrant conversation, lots of good points on both sides about who needs to pay more, who needs to pay less, and how. But when a state determines its state tax policy, it is making a statement and it’s making a statement as to how competitive that state is vis a vis others,” Jane Steinmetz, office managing principal of Ernst & Young and a High Tech Council executive committee member, said. “So, here in Massachusetts we used to be Taxachusetts, we’ve tried really hard to overcome that reputation and in some areas we’ve done better. But I’m worried, I’m just worried about the statements we are going to make to individuals and businesses making choices.”

Steinmetz, who has previously argued against amending the state Constitution to allow for a graduated income tax structure and an income surtax, specifically pointed to Massachusetts’ estate tax, corporate tax base and short-term capital gains taxes as outliers among states. Of the income surtax that will be on this November’s statewide ballot, she said, “You can debate the philosophy of that, but even proposing it is sending a message.”

While Steinmetz, Diehl and others have argued that the idea of imposing an additional 4 percent surtax on annual household income above $1 million will lead to an exodus of companies and workers, Cohn said he’s not so sure, even if it is an important issue to watch.

Cohn said cost issues will become “more and more front and center” especially if inflation continues and the economy deteriorates.

He added, “I’m not sure — and you guys can probably answer this better than I can — whether companies are making location decisions based on the tax climate in a state. I don’t imagine that workers are making decision to move to or from a state because of a millionaire’s tax … but whether they’re making those decisions, I just don’t know. But I do expect that it’s going to be something that states are going to be paying more attention to.”