Massachusetts State Police have arrested a man on multiple charges.

According to Dave Procopio of Massachusetts State Police, at approximately 4:20 p.m. yesterday, Trooper Cody Smith, assigned to State Police-Dartmouth, was stationary monitoring traffic on Route 24 southbound in Freetown. At that time, he observed a red Nissan Murano traveling approximately 80 miles per hour in a 65 mile per hour zone. He also observed the operator holding a cell phone in his hand to his head. Trooper Smith activated his cruiser’s lights and siren and signaled the vehicle to stop. While the operator was pulling over, Trooper Smith observed him reach toward the front passenger seat area.

Upon the Nissan coming to a full stop, Trooper Smith approached it and identified the operator as Taylor Stavrou, 24, of Taunton, and informed him why he was stopped. After some conversation with Stavrou, Trooper Smith observed a knife on his person. Fearing there may have been another weapon in the vehicle where Stavrou was reaching, he was removed and pat-frisked. During the pat-frisk, Trooper Smith felt a baseball-sized item on Stavrou’s person. He was secured in the rear of a cruiser and questioned further. 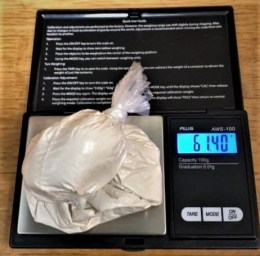 After subsequent investigation, the item was dropped from Stavrou’s pant leg. Trooper Smith suspected the substance inside to be fentanyl and placed him under arrest. The total weight of the suspected fentanyl was more than 61 grams. After a search of the vehicle, Trooper Smith located a large amount of cash, multiple cell phones, and illegally possessed Suboxone. Trooper Smith also discovered on scene that Stavrou’s driver’s license was revoked. 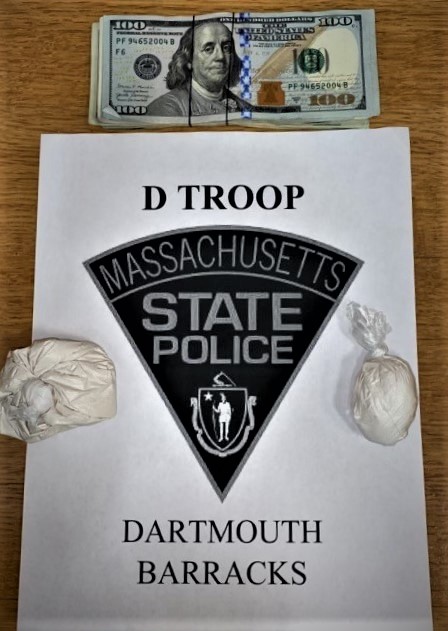 Stavrou was transported to State Police-Dartmouth for booking. He was eventually transported to the Ash Street Jail and scheduled for arraignment at Fall River District Court on the charges of Trafficking in Fentanyl, Possession of a Class B Substance, Operating a Motor Vehicle with a Revoked Driver’s License, and Speeding.