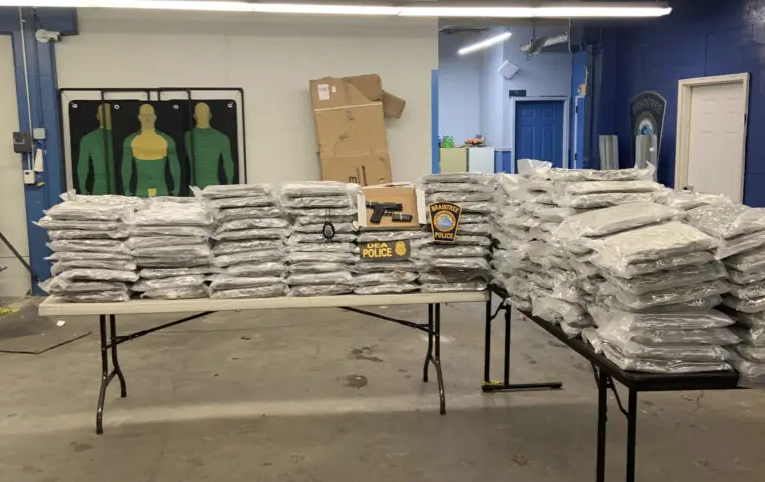 BRAINTREE — Chief Mark Dubois reports that the Braintree Police Department seized over 330 pounds of marijuana and a gun following an investigation on Tuesday, Jan. 5.

On Tuesday, members of the Braintree Police Drug Control Unit were conducting surveillance in the Lennox Farms apartment complex, located at 550 Liberty Street, after receiving information about potential drug activity in the area.

While conducting surveillance, officers observed a man in a red car, later identified as Jamir Castillo, 29, of Roslindale, who is known to police.

Officers observed Castillo approach a unit within the complex where a person opened a garage door and drove another vehicle out of the garage to allow Castillo to pull his vehicle inside and close the door.

Minutes later Castillo opened the garage and left the complex heading toward the highway.

Officers followed Castillo and conducted a motor vehicle stop on nearby Union Street in order to question him about his activities. During the roadside interview, officers determined that they had probable cause to search Castillo’s vehicle.

In the trunk of the vehicle, officers located and seized 14 one-pound bags of marijuana. Hidden behind a speaker in the vehicle was a 9mm Glock handgun with a large capacity magazine.

Castillo was placed under arrest and the vehicle was towed from the scene.

Later that day, investigators applied for and received a search warrant to search the Lennox Farms apartment that Castillo had entered through the garage.

Inside the apartment, officers located an additional 320 vacuum-sealed bags of marijuana, weighing approximately one pound each.

The apartment was unoccupied and unfurnished and is believed to have been used as a storage location for a marijuana distribution operation.

The investigation remains ongoing and additional charges and arrests are expected to be made.

Chief Dubois commended the work of the Braintree Police Drug Control Unit, including an officer who is also a member of DEA Task Force 5, and the Quincy Police K9 unit, who assisted in the investigation.

“This was fantastic police work all the way around by our officers and those who assisted, and now there are 300 pounds of marijuana off the streets along with an unlawfully possessed firearm,” Chief Dubois said. “Narcotics dealing and distribution of any kind will not be tolerated in Braintree and we will deploy as many resources as we have at our disposal to keep drug dealers out of our community.”