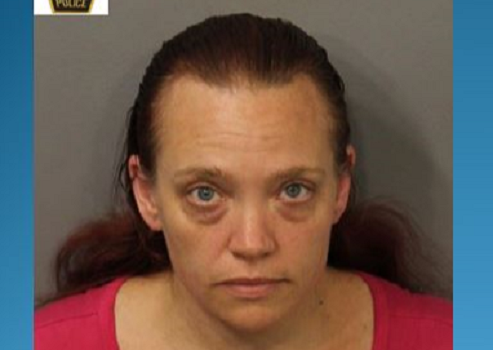 Fall River police arrested a city woman after being tipped off with very detailed information that led to the capture.

According to Detective John Robinson, on Thursday July 11th, Detectives from The Fall River Police Departments Vice and Intelligence Unit were on pre-search warrant surveillance in Providence Rhode Island. The target of the search warrant was 43 year old Heather Gilchrest-Dawson of 163 Winter Street #15 Fall River and any bags or suitcases in her possession.

Lead Detective Gary Barboza was assisted by Detective Lieutenant Greg Wiley, Detectives Bryan Custadio, Heather Moniz, Richard Aguiar, Kwin Silva, Guy Furtado, Tryce Grant and K9-Cpone. Also assisting were Seekonk Detectives Charlie Mello and Mathew Gardner. A tip was received indicating that Gilchrest-Dawson would be travelling from Arizona to Massachusetts with a large quantity of illegal narcotics. A picture of her boarding a Greyhound bus in Arizona with a white duffle bag and a blue backpack was included with the tip.

At approximately 3:00 p.m., Detectives watched the Greyhound bus, with Gilchrest-Dawson on board, pull into the Providence bus station. As passengers disembarked, detectives observed Gilchrest-Dawson wearing the same clothing and carrying the same bags, a white duffle bag and a blue backpack as in the picture.

Detectives observed her converse on a cell phone while pacing around. A short time later a gray Nissan arrived. Gilchrest-Dawson walked over and entered the rear passenger seat with her bags. The vehicle was believed to be the Uber the tipsters said Gilchrest-Dawson would be using to travel with.

The Uber left the bus station and got onto Route 95 south, then switched over to route 195 east where it took the Seekonk exit. The Seekonk detectives had the Nissan stopped by a marked Seekonk police cruiser. Detective Barboza asked Gilchrest-Dawson to step out of the Nissan. As she did Det. Barboza observed her carrying the same bags, a white duffle bag and a blue backpack. Det. Barboza informed Gilchrest-Dawson that he had a search warrant for the bags and her person. Det. Barboza then retrieved K9-Capone and gave the command to search. K9-Capone hit on the blue backpack. The backpack was opened and a box was located. Within the box was a sealed bag containing a substance believed to be Methamphetamine. Two additional bags of suspected Methamphetamine were located by Detective Heather Moniz bringing the total weight to 357 grams.

Gilchrest-Dawson was taken into custody on a charge of Trafficking of a Class B substance over 200 grams(Methamphetamine).