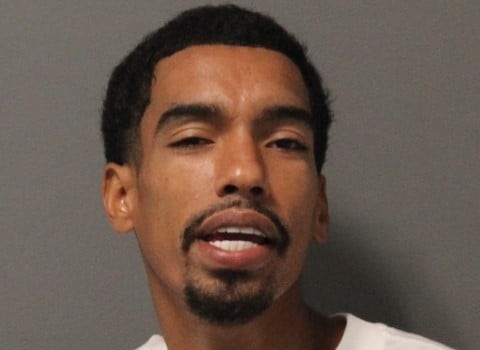 DARTMOUTH, MA – On Sunday, September 5, 2021 at approximately 1:20 p.m., Officers Craig Cote and Trevor Gregoie responded to the North Dartmouth Mall regarding the sighting of a known larceny suspect.

Upon arrival, the officers were notified that the suspect was last seen walking towards the Stop & Shop Plaza.

While checking the area, Officer Cristina Bum informed other responding officers that she had spotted the suspect running towards Lowe’s. In response, Officer Brian Parent attempted to make contact with the suspect, at which time he, the suspect, disregarded Officer Parent’s lawful command to stop, and continued to run inside of Lowe’s.

As numerous Dartmouth Police personnel, including Officer Justin Amaral and his
K-9 partner Gunner, were now in the area, the store was placed on lockdown so a search could be conducted.

During the course of the search, Officer Amaral and Gunner located the suspect hiding amongst some boxes, and subsequently placed him under arrest.

The suspect, subsequently identified as Jesus Torres, 28, of New Bedford, was charged with larceny over $1,200, three counts of shoplifting, and resisting arrest. In addition, Torres also had seven outstanding warrants, all of which are related to larceny and robbery.

According to Chief of Police, Brian P. Levesque, “This is just another outstanding example of exceptional teamwork put forward by both my officers and dispatchers. Their ability to coordinate a search in such a short period of time, while still maintaining the safety of the general public, was nothing short of remarkable. It is now my hope that justice is properly served on this career criminal who, as of this time, has no business being on the street.”