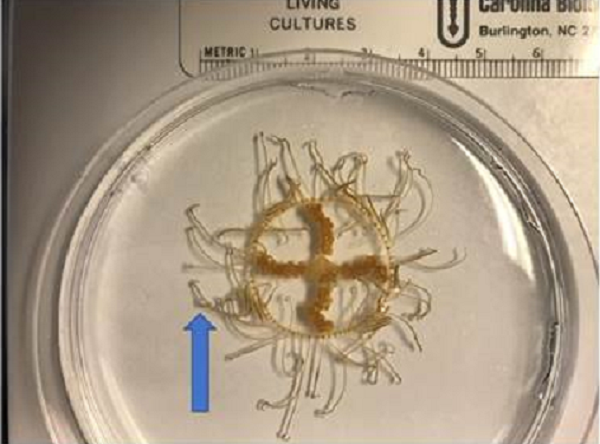 According to DEM, over the past 10 days, three people contacted RIDOH who reported experiencing stinging sensations and painful welts after shellfishing and recreating in Point Judith Pond. RIDOH reached out to DEM for assistance, and DEM marine biologists surveying Point Judith Pond confirmed the presence of the clinging jellyfish (currently identified as Gonionemus vertens).

Adult clinging jellyfish are about the size of a dime and marked with an orange-brown cross on their transparent bodies. These small jellies have sticky pads on their tentacles that allow them to cling to seagrasses and seaweeds. The clinging jellyfish is not known to inhabit ocean beaches or other sandy areas but tends to attach itself to submerged aquatic vegetation and algae in back bays, coastal ponds, and estuaries, areas not heavily used for swimming. Their sting is known to be extremely painful and can result in in hospitalization in some individuals.

The clinging jellyfish is very difficult to spot in the water. DEM encourages the public to use common sense and caution in areas where the jellyfish are suspected. Anyone wading through these areas, especially near aquatic vegetation, should take precautions, such as wearing boots or waders to protect themselves.

Originally thought to be native to the Pacific Ocean, clinging jellyfish are prevalent in the northeast, particularly from Connecticut to Maine and in the waters surrounding Cape Cod. They also have been found on Long Island and in northern New Jersey. DEM and RIDOH have received reports from the public that clinging jellyfish may be present in Potters Pond in South Kingstown and the Narrow River in Narragansett. DEM marine biologists surveyed Potters Pond in early July and did not observe the jellies at that time.

People can react differently to a sting from a clinging jellyfish. Symptoms range from no discomfort to severe pain, redness at the sting site, and respiratory and/or neurological problems. Symptoms typically last about three to five days. RIDOH advises that if you are stung by a clinging jellyfish:

• Put white vinegar on the sting site to stop any remaining stinging cells.
• Remove any remaining tentacles with fine tweezers. Be sure to wear gloves to prevent additional stings to your hands.
• Soak the skin in hot water (110° – 113°F) or take a hot shower for 20-45 minutes.
• If symptoms do not go away or pain gets worse, seek medical attention.

For more information on clinging jellyfish, please refer to the attached factsheet published by the Woods Hole Oceanographic Institution