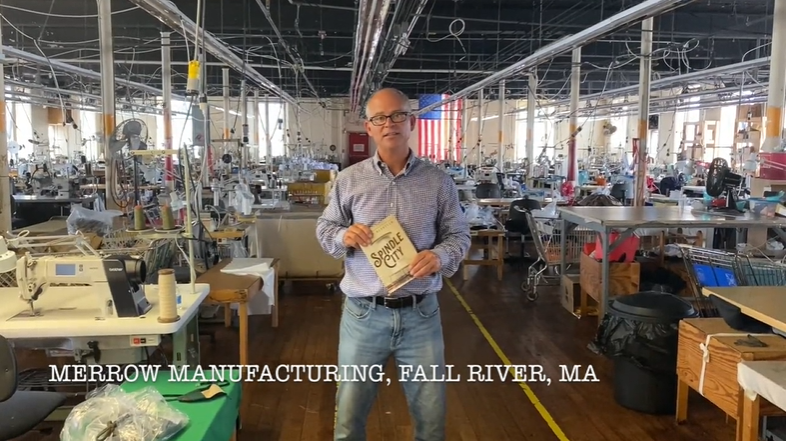 In his recently released book, “Spindle City,” Central Connecticut State University assistant professor of English and Fall River native Jotham Burrello spins a tale set in 1911 during Fall River’s Cotton Centennial celebrations. Research and stories shared by Burrello’s family in the region add detail to the story, which “delves into the lives, loves, and fortunes of real and imagined mill owners, anarchists, and immigrants, from the Highlands mansions to the tenements of the Cogsworth slum, chronicling a mill town’s, and a generation’s, last days of glory,” according to Burrello.

“My mother’s family lived, worked, and is buried in Fall River. My great grandfather, James O’Donnell died in a mill accident in 1915, and my great aunt’s stories of that time sparked my interest in the history of the city. (My grandfather, Thomas O’Donnell was the ad manager at the Herald in the 50s and 60s.) Reading about the 1911 Cotton Centennial, and President Taft’s visit, in the archives of the Fall River Historical Society, started me writing. His visit, coupled with fictional events of that day, starts the novel.”

Burrello had a clear vision when writing the book.

“It’s a literary novel. The story reimagines the bustling spirit, social mores, worker unrest, and cutthroat underbelly of this lost world: the Yankee owners, immigrant laborers, and the struggle for women’s rights. And there is a fire. Mills with oil-soaked maple floors burned. A detailed synopsis and videos, recently videotaped at Merrow Manufacturing on Bedford Street are featured.”

When telling the story surrounding the height of mill-time in Fall River, Burrello thought that a mix of imagination and reality worked best.

“I decided to mix imagined characters with real figures from that time. In addition, I was interested in the operatives, particularly the women and immigrants who toiled in the mills. Lewis Hine’s photographs of child labor were another archive that guided my early research. The women characters are the moral center of the story. Chapter two features a trip to the Azores, detailing the backstory of Portuguese operative Joao Rose.”

Burrello stated that one reader recently described the book as a love letter to historical Fall River. He is happy with the initial response it has received.

“I’m pleased after ten years of writing, the book has found readers.”

The hardback version of the book features a map of the city. It is also available in e-book and audio from Blackstone Publishing.

Burrello had a scheduled event at the Fall River Historical Society, but due to COVID-19, it has been postponed, however, copies of the book are available in the museum shop.

Readers can also join a virtual book discussion on August 6th, at 6:30 p.m. at banksquarebooks.com.