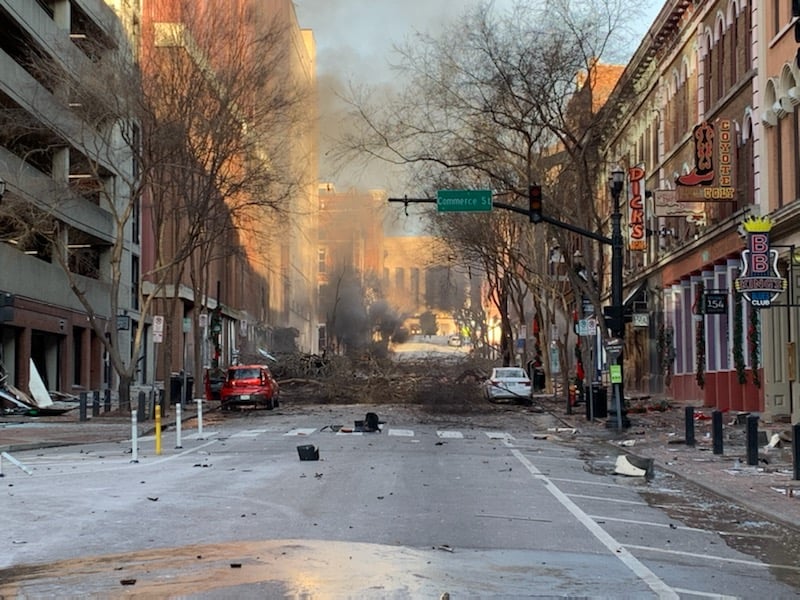 MNPD, FBI, and ATF are investigating today’s intentional 6:30 a.m. explosion of an RV outside 166 2nd Avenue North downtown in Nashville. Vehicle and pedestrian traffic downtown is restricted as the investigation continues.

Officers responded to a shots fired call on 2nd Avenue at approximately 5:30 a.m. The department’s Hazardous Devices Unit was called to check the RV as officers were warned that an explosion may be taking place. Officers went door to door to evacuate. As the Hazardous Devices Unit was en route to the scene, the vehicle exploded outside an A-T-&-T transmission building. Multiple buildings on 2nd Avenue were damaged, some extensively.

Three were transported with minor injuries, according to the Nashville Fire Department. At least one officer was thrown to the ground due to the impact of the explosion.

Nashville Police canine teams are doing protective sweeps in the downtown area checking for bombs as a precaution.

The structural integrity of buildings are also being determined.

Anyone with information about this case is asked to contact Crime Stoppers at 615-742-7463.