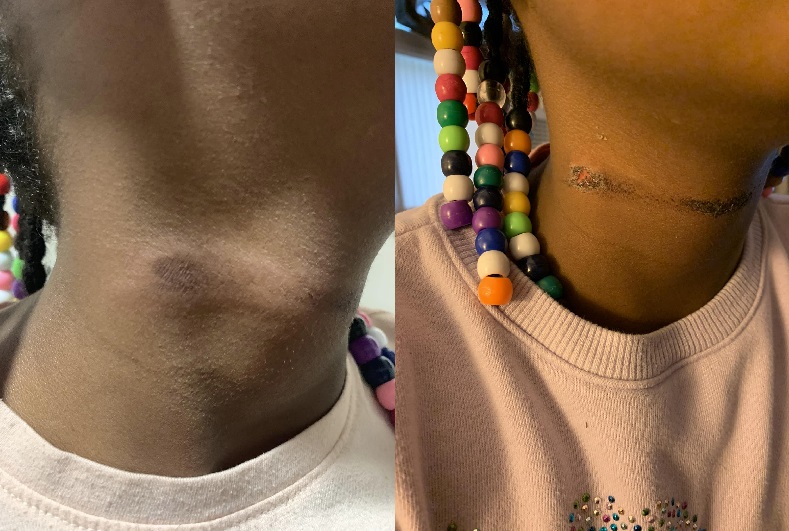 A Bristol County mother is expressing her frustration after an incident where her daughter received neck injuries from a rope.

Lauren Williams took to social media with pictures as evidence.

“So, this happened Tuesday. (Daughter) came home from school and said two kids wrapped a rope around her neck. I didn’t get a phone call, email, text, NOTHING. Naturally, I called the school to get answers and of course I didn’t get any. The school nurse COULD NOT explain to me why nobody called me. I told her that’s fine. I’m driving to the school right now (I live less than 5 minutes away). She put me on hold and LEFT. I get down there and speak with the assistant principal who at first told me maybe she ran into the rope. I had to shut that (expletive) down because EXCUSE ME. Then I asked why the hell I wasn’t called (here’s the kicker). She said all phone calls home are at the nurse’s discretion. SO YOU MEAN TO TELL ME YOU DONT THINK THIS WARRANTED A PHONE CALL HOME!!! They told me the cameras they have set up around the school show absolutely nothing and then when I went up there, they claimed they were able to see them playing. She said she spoke with the kids involved and they all had the same story that they weren’t being malicious. I’m telling y’all IDGAF MY CHILD has maintained that they were trying to be mean when they did this. I contacted the police. They told me I have to go through the school’s resource officers. Ok cool. I called and left messages. No response.”

Williams later stated that the school superintendent scheduled a meeting on Monday to discuss the incident.

“The Taunton Public Schools administration was made aware of an incident this week at the Elizabeth Pole Elementary School involving a group of students at recess where a student’s neck was injured by a jump rope on Tuesday, Oct. 11.

“After a thorough investigation by school officials, including interviewing the students involved, it has been determined that the incident was an accident that occurred when a group of students were playing together with the rope, wrapping it around each other and spinning each other by pulling on the rope. At this time, there is no evidence to suggest that there was any malicious intent behind this incident. A Taunton Police School Resource Officer was notified of the situation and attempted to contact the student’s family.

“Through a review of this incident by district administration, however, it has become apparent that there were reporting and communication errors made by school officials, including that the student’s parents were not notified of the student’s injury after visiting the school nurse following the incident.

“Ensuring student safety and wellbeing is our core responsibility, and communication is a key part of that responsibility. We are committed to ensuring we are more proactive moving forward, beginning with the implementation of a corrective action plan for the school staff members involved, as well as professional development around this issue for all administrators in the district.

“While we have been in contact with the student’s family throughout this week, we know we can do better.