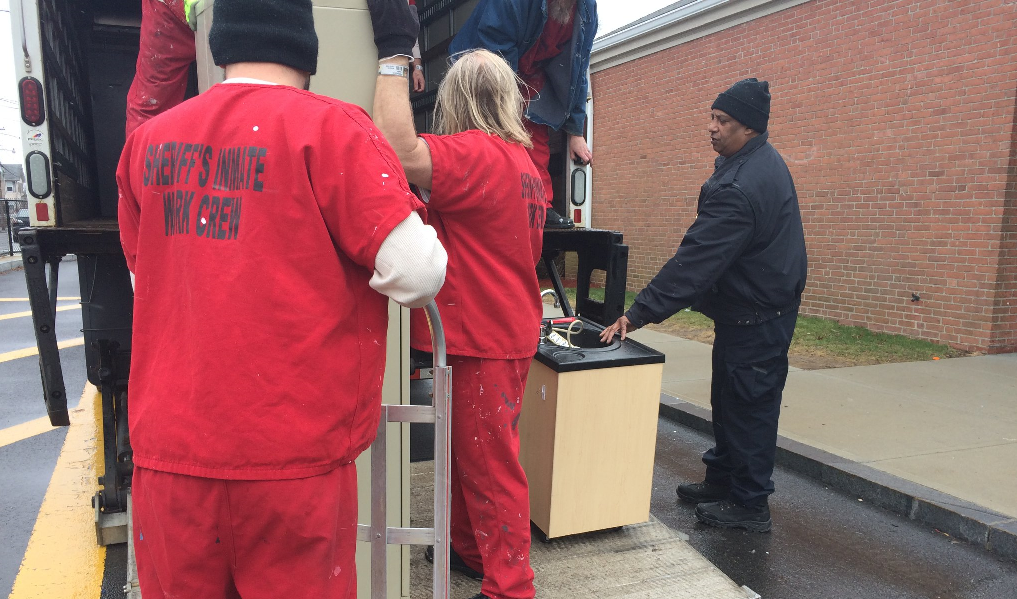 When Mother Nature wreaked havoc on the Leddy Preschool in Taunton, inmate volunteers and officers from the Bristol County Sheriff’s Office came to the rescue.

Friday’s storm brought significant damage to the Leddy school, so much so that the school department is forced to close the building and move all the classrooms to the Taunton Alternative High School.

So on Saturday, Taunton Superintendent Dr. Julie Hackett contacted Sheriff Hodgson for assistance. On Sunday, Capt. Bobby Johnson and Officer Eric Cousens led two crews of inmate volunteers to the Leddy School to help pack everything and move the entire school. They started around 7-7:30 a.m. and didn’t get back to the jail in Dartmouth until around 8 p.m.

On Monday, three crews of inmate volunteers were still moving desks, chairs, supplies, filing cabinets and other items large and small, loading them into trucks at the Leddy school and unloading them at TAHS. Almost all of the Leddy classrooms had been emptied by late Monday morning.

“We would still be on the first classroom if it wasn’t for them,” said Peter Farinha of the School Department, one of many who were helping with the move. “We’re very thankful. Those guys are working so hard, and I haven’t heard one single complaint.  We can’t thank them and the Sheriff enough.”