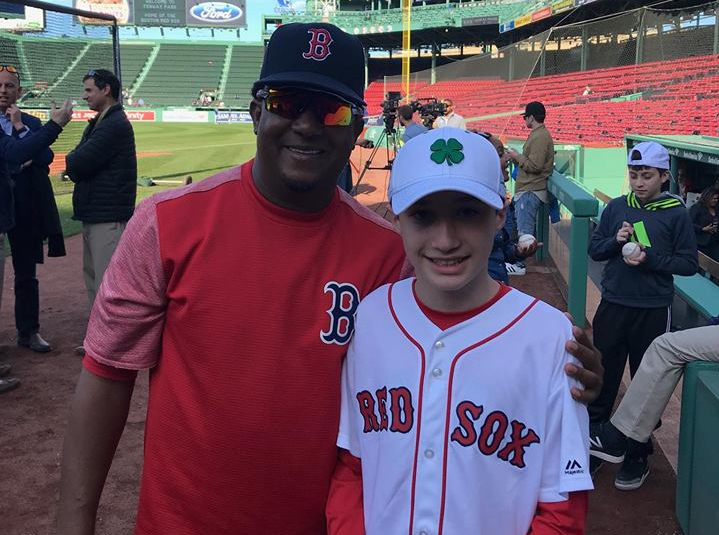 Photo courtesy of Freetown Police and the Martin family

Boy what a day it was. The only thing missing was a win.

Cody Martin, the 13 year old from Lakeville suffering from a brain tumor, got his police escort to Boston courtesy of the Freetown Police Department on Tuesday. That, however, was just the beginning of his day.

Cody began undergoing surgery Wednesday morning at Boston’s Children’s Hospital to remove the benign tumor which is what led to the kind gesture from the Freetown Police. Freetown Police Officer Phillip Pine organized the escort. Cody and his family also got tickets to see the Boston Red Sox later in the day, but it wouldn’t be just an ordinary game for Cody.

A follower saw our story and our interest in trying to get Cody a special experience at Tuesday’s game. The follower passed the story on to Jennifer Abbott who had previously worked for the Red Sox. Upon reading our story, Jennifer sent an email to the team Tuesday morning and by 3:30 p.m. the amazing staff at Fenway had contacted Cody’s family to let them know of the evening they had planned for him.

For starters, the Sox met the Martin family at the gate and escorted them to batting practice. There, Cody met the likes of hall of famer Pedro Martinez among others. The Red Sox organization also upgraded the Martin’s seats for the game. That was not all, however. They had one more special event planned. The team invited Cody onto the field to call the start of the ball game!

Check this out! Cody Martin and his family were invited by the Boston Red Sox to upgrade their seats and call the start of the ball game this evening! Way to go Cody!!

Posted by Freetown Police Association on Tuesday, May 1, 2018

The Red Sox lost a tough one in extra innings, 7-6, but they left the Martin’s with a night they will never forget. We hope Cody gets a good prognosis after today’s surgery to make it an even happier ending.