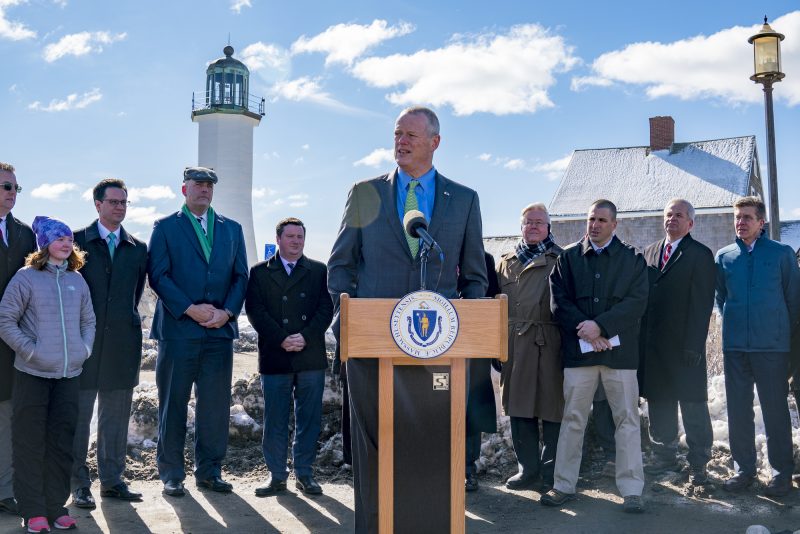 SCITUATE — Governor Baker today filed legislation to authorize over $1.4 billion in capital allocations for investments in safeguarding residents, municipalities and businesses from the impacts of climate change, protecting environmental resources, and investing in communities. Announced by Governor Baker today from Scituate, An Act Promoting Climate Change Adaptation, Environmental and Natural Resource Protection and Investment in Recreational Assets and Opportunity will enable critical investments at the state and local level and build upon Executive Order 569 to build a more resilient Commonwealth.

The legislation would put into law essential components of Governor Baker’s Executive Order 569, which established an integrated strategy for climate change adaptation across the Commonwealth, including the Statewide Hazard Mitigation and Adaptation Plan – a blueprint to protect residents, communities, and local economies. The legislation will also put into law the Baker-Polito Administration’s Municipal Vulnerability Preparedness grant program, which has now enrolled over 20% of communities across the Commonwealth in an effort to plan for, and build resilience to, climate change.

“To build a sustainable and resilient Commonwealth, we must make strategic investments in climate resiliency and environmental protection across the state and shorelines,” said Governor Charlie Baker. “This winter, we’ve been reminded of how critical environmental assets like seawalls and dams are to our communities and how important these proposals will be for safeguarding municipalities and businesses from the impacts of climate change.”

“Municipalities across Massachusetts are facing the ongoing challenges of climate change as they work to ensure the safety of residents and the health of critical environmental resources,” said Lieutenant Governor Karyn Polito. “Our proposal seeks to build upon our administration’s climate adaptation leadership and provide communities with the tools they need to build up resiliency efforts through new grants and programs aimed at protecting critical environmental resources.”

Recognizing the significant impact of climate change on coastal and inland communities, the legislation authorizes $300 million to respond to and prepare for extreme weather, sea level rise, inland flooding and other climate impacts:

$170 million will be used to fund improvements and repairs to dams and seawalls and to implement diverse coastal resiliency strategies
$50 million will provide planning and action grants to communities through the Municipal Vulnerability Preparedness (MVP) Program
$60 million will be invested in implementing the Commonwealth’s Integrated State Hazard Mitigation and Climate Adaptation Plan.

Further expanding the Baker-Polito Administration’s Executive Order 569, the proposed legislation codifies the commitments under the Executive Order, including issuance of, and ongoing updates to, an integrated, state-wide hazard mitigation and adaptation plan, continuation of the MVP program, and support for ongoing state agency climate change vulnerability assessments. The legislation also requires that all relevant programs authorized through this bond are consistent with the integrated plan to ensure that the Commonwealth is making resilient and strategic investments across energy and environmental programs.

The legislation allocates $297 million to continue supporting communities around the Commonwealth and the environmental stewardship work they do, including:

$125 million for community investment grant programs for municipalities, regional planning agencies and other eligible entities
$25 million for tree planting and forest land protection programs. In addition to the grant programs administered by the Executive Office of Energy and Environmental Affairs (EEA)
$50 million for the Massachusetts Department of Transportation’s Complete Streets Program which provides funding to communities to provide safe and accessible options for all travel modes – walking, biking, transit and vehicles.

The legislation also includes over $270 million to support environmental programs at the Massachusetts Department of Environmental Protection and other agencies ranging from air and water quality monitoring to hazardous waste cleanup and the restoration of rivers, wetlands, streams, and lakes. This includes an additional $60 million for the Commonwealth’s Clean Water Trust to continue its strong partnership with cities and towns in developing water infrastructure projects. To protect the Commonwealth’s maritime industry, the bill includes a proposal to allow the Department of Fish and Game to update decades-old fines and penalty schedules for marine fisheries violations, including doubling non-criminal fines and increasing criminal penalties.

Continuing its dedication to ensuring all Massachusetts residents have high-quality access to outdoor recreational opportunities, the Baker-Polito Administration has committed $580 million in authorizations to enable investment in deferred maintenance and recreational resource stewardship across state government–including $25 million for the expansion and interconnection of trails through the MassTrails program.

This bill amends the laws of the Commonwealth to improve agency operations, empower municipalities, and increase recreational opportunities. It would also improve the Division of Marine Fisheries’ ability to enforce marine fishery laws, protecting Commonwealth fisheries by updating decades old criminal and civil fines and penalties. The Department of Conservation and Recreation and Division of Fisheries and Wildlife would be authorized to provide discounted parks passes and fishing and hunting licenses for veterans.

To protect the interests of the Commonwealth’s ratepayers, this legislation empowers the Department of Public Utilities to review proposed rate changes within the context of other anticipated changes to ratepayers’ bills. The Department of Energy Resource would also be directed to create a new clean peak standard for electricity suppliers to increase the usage of clean energy during periods of high, carbon intensive, and expensive electricity demand, with the long-term goal of reducing ratepayer costs while continuing the Baker-Polito Administration’s commitment to lowering greenhouse gas emissions.

“Given the severity of recent storms and the mounting evidence for sea level rise, I am confident that these coastal resilience funds will prove essential to ensuring the continued health and economic livelihood of Scituate and our coastal communities,” said State Representative Joan Meschino (D-Hull). “Thank you to the Baker Administration and EEA for putting forward this environmental bond bill.”

“Massachusetts has now experienced three severe coastal storms over the last two weeks. It’s clear that the Commonwealth, and the South Shore in particular, need to make significant investments in order to improve our resiliency during these events,” said State Senator Patrick O’Connor (R-Weymouth). “This investment of $1.4 Billion will allow us to bolster our power grids and strengthen our seawalls. I thank the Baker-Polito administration for their continued support and investment in our coastal infrastructure.”

“I want to thank Governor Baker for coming to Scituate to make this important announcement today,” said State Representative Jim Cantwell (D-Marshfield). “We are facing a triple threat of rising sea levels, more frequent and intense storms, and old crumbling infrastructure. This environmental bond bill will help make essential investments to help our Commonwealth deal with this triple threat to protect lives, property, and businesses.”

“Governor Baker deserves high praise for this bond bill, which gives communities urgently needed resources to reduce climate risks, encourages the use of nature-based solutions, and begins the critical review of state policies and practices that do not currently account for climate change,” said Brad Campbell, president of Conservation Law Foundation. “CLF looks forward to working with the governor and Secretary Beaton to achieve prompt enactment of this legislation.”

“Governor Baker today takes a great next step by proposing robust funding for the Commonwealth to support science, planning and assistance to communities to address the impacts of climate change,” said Jack Clarke of Mass Audubon and Steve Long of the Nature Conservancy on behalf of the Massachusetts Climate Change Adaptation Coalition. “The Commonwealth is at the national forefront of climate change adaptation and resiliency. The Bond will go a long way to enhancing safety, avoiding costs and using nature itself to combat the impacts of climate change. We look forward to continued collaboration progress and urge the Legislature to act now.”

“I am pleased to see that deferred maintenance has been made a priority for the Department of Conservation and Recreation,” said Whitney Hatch, Chairman of DCR’s Stewardship Council. “The $580,000,000 proposed for deferred maintenance and recreational improvements would be a vital ingredient in helping DCR improve the condition and quality of our parks and recreation facilities.”