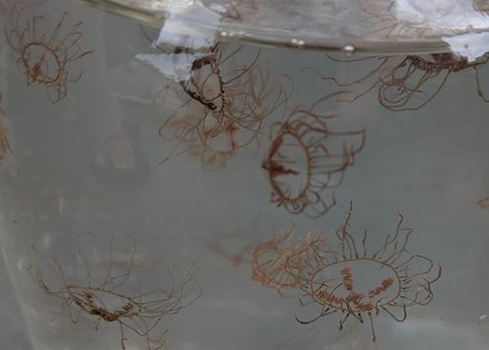 A new warning has been sent out concerning jellyfish.

According to RIDEM, clinging jellyfish, a species that can have a powerful sting for those who are sensitive to it — have been found in Point Judith Pond, Potter Pond, and Narrow River this month. These are the same waterbodies and approximately the same time we began seeing their presence last summer.

Adult clinging jellyfish are about the size of a dime and marked with an orange-brown cross on their transparent bodies. Their sting can be extremely painful and can result in hospitalization in some individuals.

DEM encourages the public to use common sense and caution. Waders, quahoggers, and others using shallow, protected waterbodies, especially near aquatic vegetation like eelgrass, should take precautions against stings by wearing boots, waders, or wetsuits to protect themselves, or stick to sandy or surfy areas away from vegetation.

Some research has shown that the jellies will die off if the water gets too warm (~82F), but in many areas in RI the water will not typically reach this temperature. Therefore, the jellies will likely be present until they live out their life cycle or are consumed by other predators. Last year, Division of Marine Fisheries biologists observed the highest abundances in July, while numbers began to decrease in August and their presence was gone by early fall.

Two weeks ago, the Massachusetts Department of Conservation and Recreation warned of beaches containing huge jellyfish.