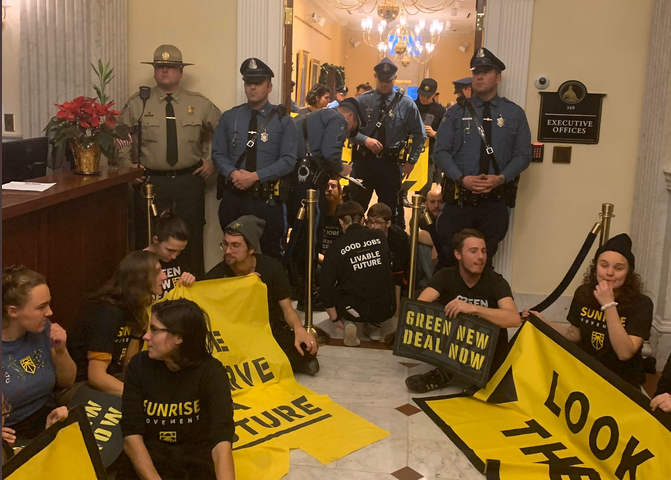 Boston, MASSACHUSETTS – On Friday, in the halls of the Massachusetts State House, a group of 27 youth activists from the Sunrise Movement were arrested following a sit-in at the offices of Governor Charlie Baker. The group, who is looking to stop climate change, was at the State House calling on state leaders to take action to move the currently introduced Mass Power Forward legislation, along with committing to a Massachusetts Green New Deal. More than 400 young people and allies participated in the statehouse action at its peak.

The sit in was one of a series of actions taken by the group demanding Massachusetts State leaders enact policies to keep fossil fuel emissions below the levels recommended by the October 2018 UN IPCC report as well as to adopt a state-level Green New Deal. The sit-in was staged in tandem with the December 6th Climate Strike, a highly anticipated rally and march organized by Boston area youth as part of the international Youth Climate Strikes movement. Over 1000 people attended the strike and march according to an estimate by the Sunrise Movement.

Activists occupied Baker’s office for more than six hours, singing and telling their stories. “Before I leave today, I have a message for Governor Baker,” said Saya Ameli Hajebi, a member of both the Youth Climate Strikes and Sunrise Boston. “How many more people have to watch as the bits of brick and drywall that used to be their school drift away in more and more extreme hurricanes before you take us seriously? How many more families have to watch the last flakes of ash that used to be their home burned down in California before you sign a Green New Deal.”

Governor Baker has not yet issued a public response to the protest.