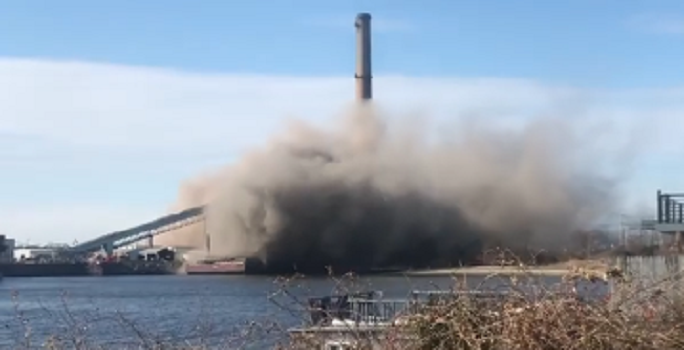 Demolition continued this morning at the former Brayton Point power plant in Somerset.

Just after noon, a large section of a building at the site was taken down.

Police had released a warning on Saturday that the demolition was scheduled from 10 a.m. to 3:30 p.m.

Next time you ask why the people of Brayton Point are freaking out….

Area residents have been concerned about possible pollution from the current activities at the site including multiple demolitions, several fires that have taken place at the location, along with piles of metal seen by residents being stored on site and shipped away by boat.

Local residents have so much concern about the activities taking place, that they have formed a Facebook group titled “Save Our Bay Brayton Point”.

In a statement from the Town administration in early October of this year when demolition permits were temporarily pulled due to the fires taking place, it was expressed that the town and the location are committed to wind energy at the site.

“The town is committed to working with the Brayton Point Commerce Center to achieve its original plan to bring wind energy ashore at Brayton Point. We recognize that this is a long term project and subject to conditions imposed beyond the town’s ability to control. Accordingly, we recognize that the Center will try to mitigate their costs by allowing other activities until their plan can be achieved. We will ensure that this is done consistent with the town’s by-laws and regulations.”

Many residents, however, are becoming skeptical and want the current activities put to a stop. Despite the town stating that regulations are being followed, members of the group are not so sure.

According to member of “Save Our Bay Brayton Point” Nancy Thomas, loud noise could be heard from the site starting at 10:00 p.m. Saturday night and took place throughout the night.

“We are concerned about the salt and metal byproduct contaminating Mount Hope Bay and the wetlands abutting the CDC complex.”

The group plans to attended the next Board of Selectmen meeting on November 13th at 4:00 pm where a truck traffic limit at the site is scheduled to be discussed.