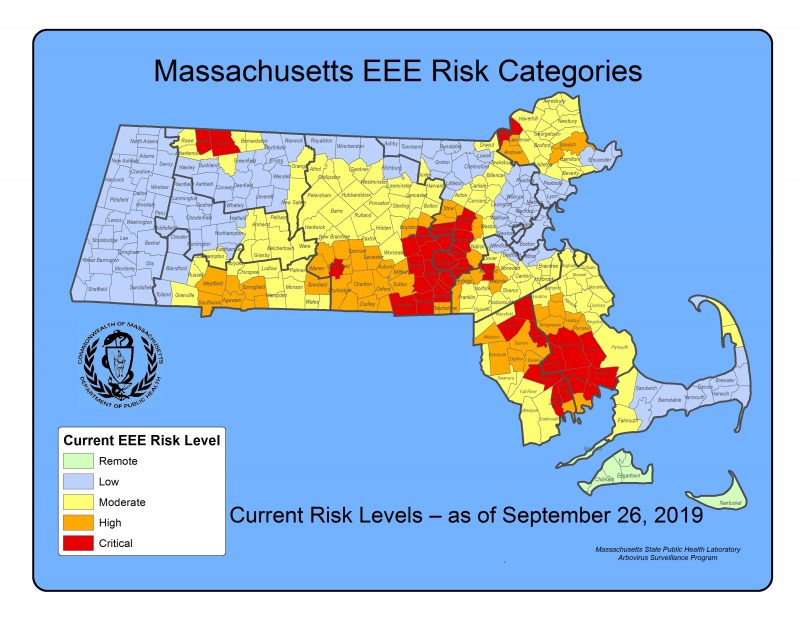 BOSTON (September 26, 2019)—The Massachusetts Department of Public Health (DPH) today announced that laboratory testing has confirmed the 12th human case of Eastern Equine Encephalitis (EEE) virus infection, a woman in her 70s from Hampden County. The patient is currently hospitalized.

As a result, the communities of Agawam, East Longmeadow, Longmeadow, Southwick, Springfield, West Springfield and Westfield have been elevated to high risk.

Based on an incorrect report filed by a hospital, DPH has been notified that the fourth death was improperly reported and the official death count remains at three people as of today.

There are 35 communities now at critical risk, 53 at high risk, and 121 at moderate risk for the EEE virus in Massachusetts. A map of the state’s current EEE risk levels can be found here.

State officials continue to remind residents to take personal precautions to prevent mosquito bites. Residents can learn more about EEE and ways to protect themselves on DPH’s website.

“Although mosquito populations are declining, the weather is keeping them active,” said State Epidemiologist Dr. Catherine Brown. “We continue to emphasize the need for people to protect themselves from mosquito bites.”

EEE is a rare but serious and potentially fatal disease that can affect people of all ages. EEE occurs sporadically in Massachusetts with the most recent outbreak years occurring from 2004-2006 and 2010-2012. There were 22 human cases of EEE infection during those two outbreak periods with 14 cases occurring among residents of Bristol and Plymouth counties.

EEE virus has been found in 422 mosquito samples this year, many of them from species of mosquitoes capable of spreading the virus to people. An additional 83 mosquitos have tested positive for West Nile Virus.

The Massachusetts Department of Agricultural Resources (MDAR) has now completed aerial spraying for mosquitoes for the season. Aerial spraying has been conducted in parts of Bristol, Plymouth, Middlesex, Norfolk, Worcester, Hampden, and Hampshire counties. Aerial spraying helps reduce risk of EEE transmission but some risk will continue to exist until there is a hard frost. For information on spraying activities that were conducted during this season, visit the DPH website at www.mass.gov/eee.

People have an important role to play in protecting themselves and their loved ones from illnesses caused by mosquitoes:

Apply Insect Repellent when Outdoors. Use a repellent with an EPA-registered ingredient (DEET (N, N-diethyl-m-toluamide), permethrin, picaridin (KBR 3023), oil of lemon eucalyptus [p-methane 3, 8-diol (PMD)] or IR3535) according to the instructions on the product label. DEET products should not be used on infants under two months of age and should be used in concentrations of 30% or less on older children. Oil of lemon eucalyptus should not be used on children under three years of age.

Be Aware of Peak Mosquito Hours

The hours from dusk to dawn are peak biting times for many mosquitoes. Consider rescheduling outdoor activities that occur during evening or early morning in areas of high risk.

Wearing long-sleeves, long pants and socks when outdoors will help keep mosquitoes away from skin.

Drain Standing Water. Limit the number of places around your home for mosquitoes to breed by draining or discarding items that hold water.

Install or Repair Screens. Keep tightly-fitting screens on all of your windows and doors.

Animal owners should reduce potential mosquito breeding sites on their property by eliminating standing water from containers. Horse owners should keep horses in indoor stalls at night to reduce their risk of exposure to mosquitoes. If an animal is suspected of having WNV or EEE, owners are required to report to DAR, Division of Animal Health by calling 617-626-1795 and to the Department of Public Health (DPH) by calling 617-983-6800.