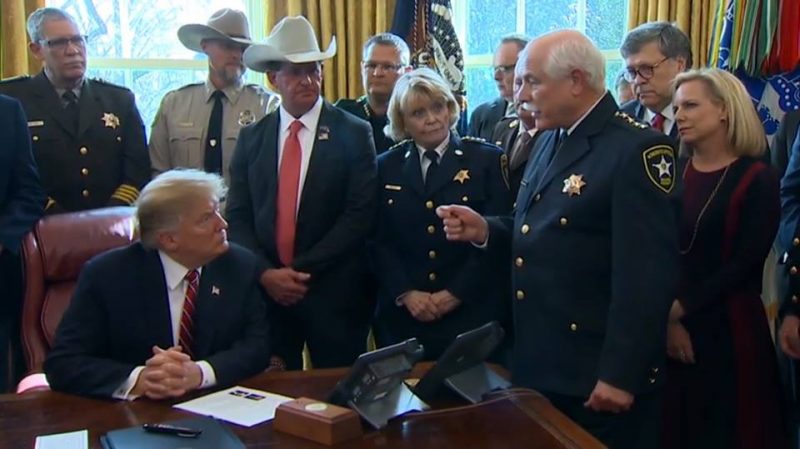 DARTMOUTH – If you’ve been following national politics lately, chances are you’ve seen the video of Bristol County Sheriff Thomas Hodgson in the Oval Office, commending President Donald Trump for vetoing a joint congressional resolution to overturn the president’s declaration of a national emergency at the nation’s southern border.

“It is a national emergency… It’s a crisis of epic proportions, and we know it. The people who are claiming it’s not haven’t gone to the border,” Hodgson said during a recent hour-long interview with me in his Dartmouth office.

A few weeks earlier, the sheriff had traveled to the U.S.-Mexico border for the fourth time, visiting McCallum, Texas, where he spoke with Border Patrol officials and attended briefings conducted by Homeland Security and Immigration and Customs Enforcement officers.

Critics often question why a Massachusetts county sheriff is getting so involved in the national immigration debate, especially to the point where he is making multiple trips to the border and Washington D.C., meeting with the president and his aides, and appearing on Fox News.

To skeptics, it looks like political opportunism. Hodgson, who has been speaking out on immigration issues for 20 years, counters that unfettered illegal immigration impacts local public safety through crimes committed by people who are not authorized to be in the United States. However, immigration advocates are quick to point that statistics actually show migrants, legal and illegal, commit fewer crimes than native-born Americans.

Hodgson also connects the issue of border security with the heroin and fentanyl that is flooding the streets of New Bedford and Fall River and killing scores of local residents.

In our hour-long discussion, the sheriff touched on these points as well as other recent immigration-related developments, including the Trump administration’s controversial “zero tolerance” policy that resulted in thousands of migrant kids being separated from their families. Here are some highlights:

In Hodgson’s view, Congress is to blame for the current state of affairs on immigration. In multiple trips to DC, the sheriff says he has seen that lawmakers have been more concerned with the politics than actually fixing the problem of illegal immigration and border security.

“I think what the American people are starting to see… it’s becoming more and more clear that Congress is the obstacle to people getting results,” Hodgson said.

The sheriff on Donald Trump: He’s a nice guy.

We all have our opinions and impressions of the president through his Twitter feed and public statements. In person, the sheriff says the president is “an affable person” who listens to people most impacted by illegal immigration.

“He’s a very kind and nice person. He’s a sensitive person,” said Hodgson, much to the surprise to many who are on the receiving end of the president’s Twitter outbursts. As to that, the sheriff says people did not elect the president based on his personality or his style.

In response to a question about the administration’s policies, Hodgson claimed that migrant kids were being separated from their families last year as a way to protect them from some of the adults who were being detained along with their parents.

“If I was arrested as a felon, I wouldn’t want my kids being held up for days in a pen with other felons,” said Hodgson, who then credited the president with ending that policy.

In this portion of the interview, some fact checking is required: Last year, after a public outcry, the president ended his administration’s own “zero-tolerance” policy of criminally prosecuting any adult who crossed the U.S. border illegally, including men and women with no prior immigration offenses and who were traveling with children.

Instead of releasing the migrant men and women on conditions that they report to court for deportation proceedings, a “catch-and-release” policy followed by prior administrations, immigration authorities detained them for criminal prosecution. Children were then separated from their parents and considered “unaccompanied,” allowing them to be placed in the custody of the U.S. Office of Refugee Resettlement.