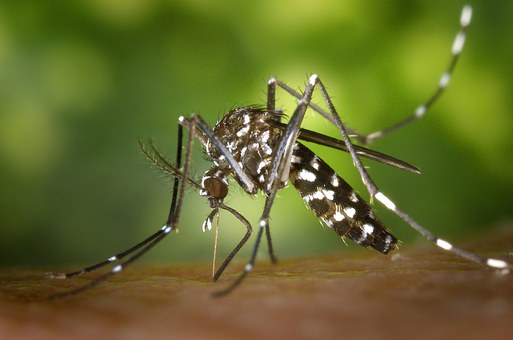 PROVIDENCE – The Department of Environmental Management (DEM) and Rhode Island Department of Health (RIDOH) are reminding Rhode Islanders that the risk of mosquito-borne disease remains. The agencies announced today that in the latest round of mosquito surveillance, one pool, or sample, of mosquitoes trapped in South Kingstown has tested positive for Eastern Equine Encephalitis (EEE). DEM set traps on October 7, submitting 52 samples to the RIDOH State Health Laboratory. The lab confirmed a EEE detection in a South Kingstown in a sample of mosquitoes that primarily bites birds while also confirming all other samples tested negative for both EEE and West Nile Virus (WNV).

With no additional aerial spraying planned for 2019, DEM and RIDOH are urging the public to continue protecting themselves and their loved ones from mosquito bites until the first hard frost of autumn. A hard frost, which is meteorologically defined as three straight hours below 32 degrees, kills adult mosquitoes. Its timing varies widely across Rhode Island. It often occurs in northern communities such as Burrillville in early October and in southern, ocean-facing communities later in the month.

DEM and RIDOH remind the public that the foundation of all risk reduction from mosquito-borne disease remains personal protection (mosquito repellent, long sleeves and pants, avoiding outdoor activities between dusk and dawn, repairing window and door screens, and dumping standing water). If possible, people should limit their time outdoors at sunrise and sunset. If they are going to be out, people should wear long sleeves and pants and use bug spray. Aerial spraying effectively reduces the risk of mosquito-borne disease, but it does not eliminate the risk completely. In addition, fewer mosquitoes are active as evening temperatures get cooler, but those mosquitoes that are active are more likely to be infected with EEE.

EEE is a rare but serious illness that occurs when people are bitten by infected mosquitoes. It can affect people of all ages. In Rhode Island in 2019, there have been three human cases of EEE with one case resulting in death. Massachusetts has experienced 12 human cases with three deaths this year; in Connecticut, four residents have contracted the disease of whom three have died. Along with the human cases, a horse (in Westerly) and three deer (one in Coventry, one in Richmond, and one in Exeter) have tested positive for EEE in Rhode Island in 2019. Year to date, RIDOH also has detected EEE in nine mosquito pools (two in Central Falls, three in Westerly, one in Block Island, one in western Coventry, one in Richmond, and one in South Kingstown) and WNV in two samples (in Tiverton and Westerly). By continuously assessing mosquito species, volume, and infection and sharing information, the state is working to minimize the risk of further human disease.

Previous mosquito prevention recommendations from RIDOH still are in effect. In August, RIDOH recommended to schools and municipal leaders that games, practices, and other outdoor activities scheduled to occur during early morning or dusk hours be rescheduled to earlier in the afternoon or relocated to an indoor venue. The “smart scheduling” of events is intended to help minimize the risk of mosquito bites for players, coaches, and spectators. RIDOH recommends that smart scheduling stay in effect for the remainder of the mosquito season, which typically ends in mid-October (after the first hard frost).

Because hard frosts happen at different times in different parts of the state and DEM and RIDOH do not monitor them, RI communities are responsible for determining when a hard frost has taken place and when the smart scheduling recommendations should be lifted.

In addition to following this smart scheduling recommendation, there are other measures that Rhode Islanders should take to protect themselves from mosquito bites, and to help minimize mosquito breeding.

-Put screens on windows and doors. Fix screens that are loose or have holes.
-At sunrise and sundown (when mosquitoes that carry EEE and WNV are most active), consider rescheduling outdoor activities that occur during evening or early morning. If you must be outside, wear long-sleeved shirts and long pants and use bug spray.
-Use EPA-approved bug spray with one of the following active ingredients: DEET (20-30% strength); picaridin, IR3535; and oil of lemon eucalyptus or paramenthane. Always read the label and follow all directions and precautions.
-If you plan to hike in the woods in daylight, it is advisable to wear repellent to prevent being bitten by daytime mosquitoes.
-Do not use bug spray with DEET on infants under two months of age. Children should be careful not to rub their eyes after bug spray has been applied on their skin. Wash children’s hands with soap and water to remove any bug spray when they return indoors.
-Put mosquito netting over playpens and baby carriages.

Get rid of mosquito breeding grounds

-Get rid of anything around your house and yard that collects water. Just one cup of water can produce hundreds of mosquitoes; an unused tire containing water can produce thousands of mosquitoes.
-Clean your gutters and downspouts so that they can drain properly.
-Remove any water from unused swimming pools, wading pools, boats, planters, trash and recycling bins, tires, and anything else that collects water, and cover them.
-Remove or treat any shallow water that can accumulate on top of a pool cover. Larvicide treatments, such as Mosquito Dunks can be applied to kill immature mosquitoes. This environmentally-friendly product is available at many hardware and garden stores and on-line.
-Change the water in birdbaths at least two times a week and rinse out birdbaths once a week.

-Remove or cover areas where standing water can collect.
-Avoid putting animals outside at dawn, dusk, or during the night when mosquitoes are most active.
-Insect-proof facilities where possible and use approved repellents frequently.
-Monitor animals for symptoms of fever and/or neurological signs (such as stumbling, moodiness, loss of appetite) and report all suspicious cases to a veterinarian immediately. If you are unsure if your horse is properly vaccinated, you should consult with your veterinarian.