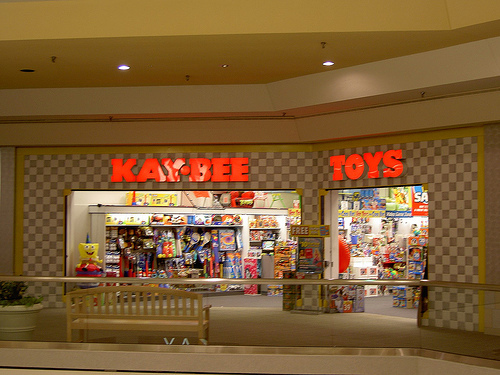 Remember KB-Toys? It didn’t start out as K-B Toys.

The Kaufman brothers in Pittsfield Massachusetts turned a toy wholesale company they acquired in the 1940s into a successful toy retailer beginning in the early 1970s. This brought about a name change to Kay-Bee Toy & Hobby.

The toy store chain really began its assent in the industry in the early 1980’s when the company was purchased by Melville Corp. By acquiring franchises such as Circus World, Kay-Bee quickly grew from a few dozen stores to about 600 and became the major competitor to Toys ‘R’ Us.

The company changed hands twice when sales had reached $1.6 billion in 1998 and its merchandise website launched. A few years later after KB was sold again, this time to Bain Capital, the slide of KB began.

In the years that followed, bankruptcies and store closures were prominent. Deep toy discounts were made in hopes of keeping the franchise alive, but In 2008 a shaky economy forced the brand to begin proceedings to go out of business. By the beginning of 2009, all stores had been closed.

Despite the store closures, the brand itself was revived in 2009 by Toys ‘R’ Us in a purchase of the KB intellectual property. What comes next, has customers of the brand excited for the possible future of KB.

In March of this year, Ellia Kassoff, founder of Strategic Marks, LLC who had acquired the trademark of KB-Toys in 2016, had stated that he is reviving the brand. He stated this back in March. “Well, with the demise of Toys R Us, this week, we have now accelerated our business plan and hope to have our stores up and running before Christmas. We’re in discussions with many of the toy manufacturers, as we try to find out the best way to support them and the 20% loss of the US toy market due to the Toys R Us liquidation. We believe we will have the infrastructure in-place and [hopefully] save the toy industry.”

In a follow up, Kassoff stated this in April. “Kay Bee Toys was and will be a fun store where people can go and find a good value while enjoying a great experience. It’s a perfect fit for today’s consumer looking for both. The big box retailers will never take the place of a toy store and you can’t ask the ‘Toy nerd’ on Amazon about the newest and greatest toys coming out.”

Kassoff discussed his plans in this May toy forum.

Kay Bee Toys didn’t open before Christmas, but with Toys ‘R’ Us also making a possible comeback, the toy industry could be exciting and fun once again.

Are you looking forward to the return of KB-Toys?

1940s: The brothers acquire a toy company as payment for an outstanding debt, and begin to expand it.

1948: The toy company thriving, the brothers decide to focus on it exclusively, and get out of the candy business.

1973: The company moves from wholesaling to retailing toys, calling itself Kay-Bee Toy & Hobby. It has 26 stores.

1977: Its name changes to Kay-Bee Toy and Hobby Shops Inc.

2000: Company comes under control of Bain Capital LLC of Boston.

January 2004: The company files for bankruptcy protection, closes more than 600 stores and lays off more than 3,400 employees.

February 2007: KB Toys closes its store at the Berkshire Mall.

August 2007: The company unveils a strategy to re-establish itself as a discount “value” store. KB’s “shrink to grow” includes some layoffs at the Pittsfield headquarters.

October 2008: KB Toys announces that more than 200 toys in its retail stores will be reduced to $10 or less as the holiday buying season approaches amid a shaky, sliding economy.

Dec. 11, 2008: KB Toys files for bankrupcty and announces plans to liquidate its assets.