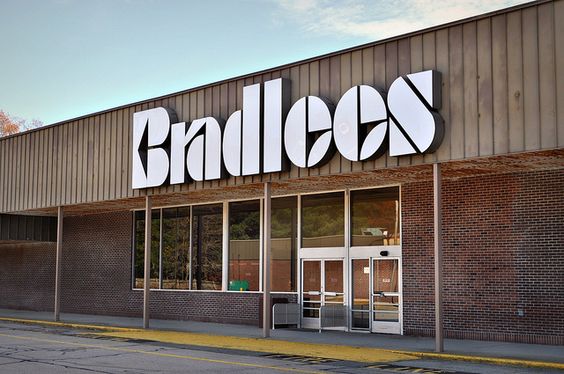 Bradlees department stores may have gone bankrupt over a decade ago, but the chain still lives on through the hearts of many to this very day.

The discounts, the food, and the variety made it a popular shopping spot for years. Especially in the northeast of the United States.

A quick look back at the life and death of Bradlees.

The early planning stages of what would become Bradlees began in the 195o’s at Bradley International Airport in Windsor Locks, Connecticut, hence where the retail chain got it’s name.

The group of businessmen opened their first location in New London, Connecticut in 1958.

The grocery store chain Stop & Shop, which is is still prominent today, acquired Bradlees in 1961. This led to many shopping plazas in the northeast that had a Stop & Shop location, to also include a Bradlees to create a “one stop shopping” experience. You could even stop by the Bradlees food counter for a quick bite to eat.

The retail chain began to grow rapidly throughout the years, helping Stop & Shop increase revenue in what was an up and down time for the Stop & Shop Franchise. The grocer hit tough financial times, particularly in the late 1980s, which prompted Bradlees to cut back on its operation costs and growth. Even closing stores in the south. Due to Stop & Shop’s continued struggles at the time, Bradlees became a separate entity in 1992.

Bradlees had some success on their own, but it was short lived. By 1995, Bradlees had filed for bankruptcy.

The retail chain came through the bankruptcy with flying colors in the late 1990s, only to land in bankruptcy once again in 2000.

Bradlees would not survive its second bankruptcy filing and closed for good in 2001. A company that once boasted over 15,000 employees and over 100 locations was no more. Many of us though would prefer to remember the good times of Bradlees. What do you miss the most? The food? The deals? The variety of merchandise? The locations? Let us know!