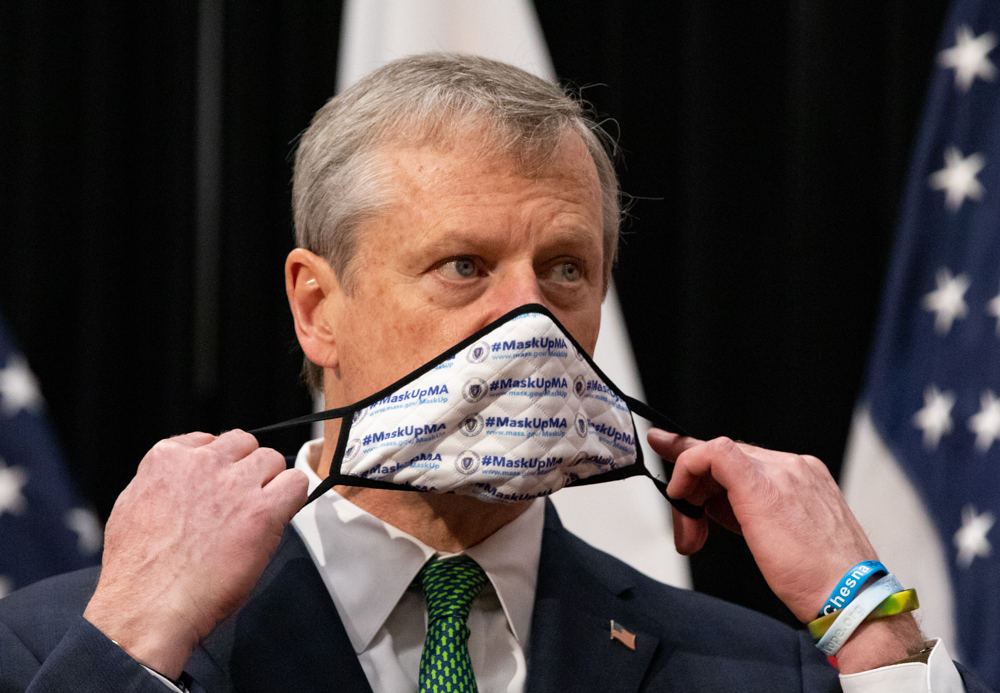 Gov. Charlie Baker pulled on a mask, branded with the state's #MaskUpMA slogan, after announcing a series of reopening rollbacks and other measures like tightened facemask requirements on Dec. 8. [Sam Doran/SHNS]

Massachusetts has not yet experienced a confirmed post-holiday COVID surge on par with the one that followed Thanksgiving, Gov. Charlie Baker said Monday, but he cautioned that conditions could still change rapidly.

Baker’s Monday press conference fell 10 days after Christmas, and he described the span’s impact as “different” than the same period after Thanksgiving. Between Dec. 26 and Jan. 4, the average positive test rate minus higher education repeat tests increased from 7.35 percent to 9.28 percent. From Nov. 27 to Dec. 4, that rate climbed from 4.86 percent to 7.48 percent. “I think the Thanksgiving thing was worse than this, but this isn’t over yet because we’re just a little bit past New Year’s,” Baker said.

“The thing that troubles us all the most is since Thanksgiving, the average age of the people who are being hospitalized has increased dramatically, and that has real consequences with respect to life and death.” That average age figure has increased from about 60 in early November to 73 now, Baker said. “If you talk to any folks in the health care world, they’ll tell you that that’s the thing that’s most distressing to them as well.”