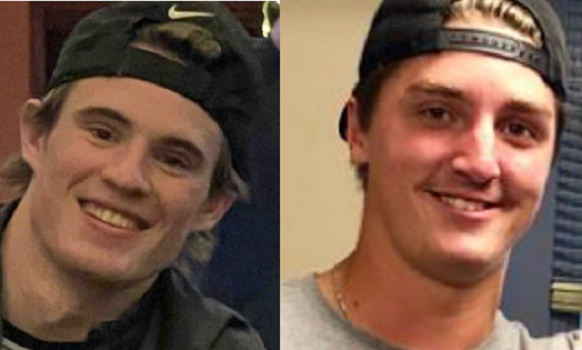 On April 16, 2021 at 12:57 a.m., Pembroke Police received several 911 calls reporting a single car motor vehicle crash at 104 Elm Street. Pembroke Police and Fire responded to the scene. The passenger had to be freed from the vehicle by mechanical means. The operator was located outside the vehicle. Both were transported to South Shore Hospital where the passenger was pronounced dead. He was identified as Joseph Birolini, 23, of Hanson. Pembroke Police contacted Massachusetts State Police Detectives assigned to the Plymouth County District Attorney’s Office and an investigation commenced.

At approximately 3:15 p.m. yesterday, the operator of the motor vehicle, William Hickey, 23, of Pembroke, succumbed to his injuries.

Investigators found that the vehicle, a 2012 Lexus SUV, was traveling east/southeast on Elm Street when it crossed the center line, crossed the opposite lane of travel, and left the roadway. The vehicle struck a tree, rolled over and came to a final resting position after striking a utility pole.

Principal of Pembroke High School Marc Talbot, where the two attended high school, stated on social media that “our hearts are heavy today, as we mourn the passing of two tremendous Titans. While they may have graduated 5 years ago, Joe and Billy touched so many of our students and staff. On behalf of the entire PHS community, our condolences to the Birolini and Hickey families.”

A memorial has been formed at the crash scene by friends and family devastated by the tragic loss of both young men.

GoFundMe pages created for both the Birolini and Hickey families have raised over $160,000 combined as of this writing.