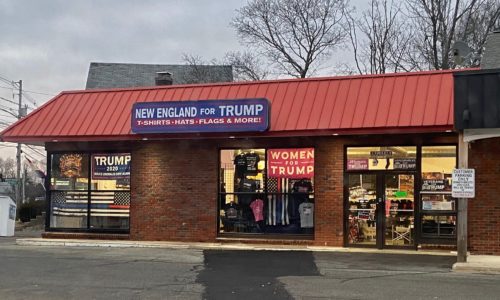 New England for Trump has no intentions of closing after the Associated Press projected former Vice President Joe Biden as the new President of the United States.

Owner Keith Lambert, who just opened a new location at 899 G.A.R. Highway in Somerset in early August, states he has no current plans to close.

“As of right now we have no immediate plans of closing. We will continue to sell Patriotic, Veteran, 2A, and Back The Blue products.”

Lambert states that he donates the maximum amount of proceeds allowed to President Trump.

Lambert also stated that in the past, but particularly recently, the stores have received numerous death threats and threats of violence and harassment.

NEFT currently has 10 locations across Rhode Island and Massachusetts.

New England for Trump sells merchandise consisting of all things Trump along with patriotic items.

Some of the items for sale include a variety of t-shirts, sweatshirts and hoodies printed in the United States in a variety of sizes for men and women along with jackets, knit hats, caps, gloves, bumper stickers, mugs, pins, and coins.