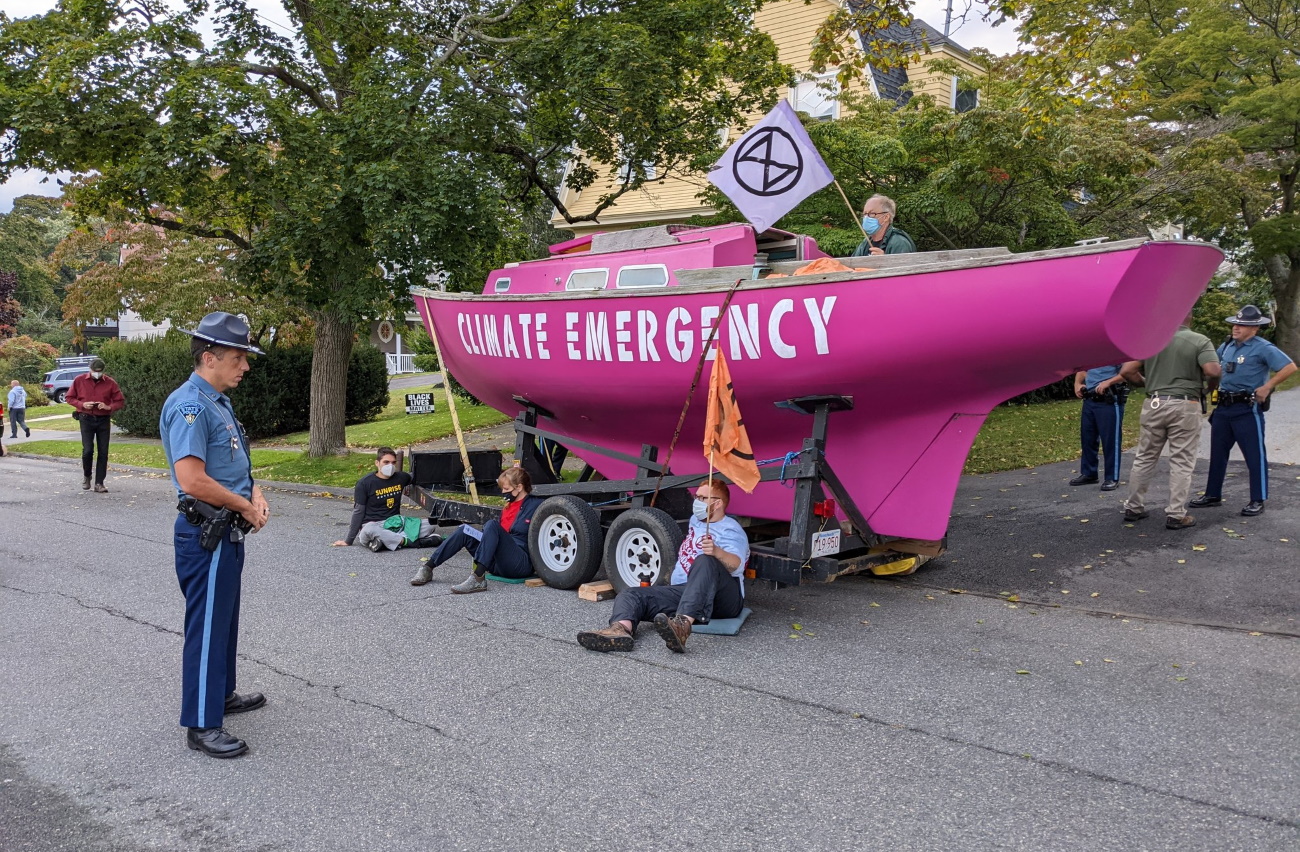 Protesters have chained themselves to boats in front of Gov. Charlie Baker’s home to demonstrate support for climate change action. An anti-addiction activist dumped hypodermic needles outside the governor’s Swampscott residence. And far-right activists routinely protested the governor’s COVID-19 restrictions within shouting distance of his front door.

One Republican lawmaker thinks these expressions of free-speech have gone too far. And he has an idea for what to do about it.

Rep. Steven Howitt, of Seekonk, has newly filed legislation that would impose legal penalties for protesting too close to the home of an elected official. While he said Baker’s experience was not his inspiration for the bill, he became determined to finalize the details and file the bill after eight people were arrested in late September for chaining themselves to a pink boat outside the governor’s house with “Climate Emergency” spray-painted on it.

The bill states that no elected official should be “subjected” to protests within 100 yards of their home, and provides for penalties should someone refuse to stop demonstrating after being asked by police to disperse.

Anyone who refuses a police request to stop protesting and leave the area would face up to a year of possible jail time, and fines of between $100 and $500.

“It doesn’t focus on Republicans or Democrats, state or municipal. It’s all the way up and down the line for an elected official, because an official is out there serving the people of a community and the families of that individual should not be harassed,” Howitt said in an interview.

Howitt said he was actually approached by a constituent with the idea for the bill, and thought it made enough sense that he filed it himself, rather than as a “by request” piece of legislation. Howitt represents Seekonk, Rehoboth and parts of Norton and Swansea.

He said his interest in the issue is broader than simply wanting to shield Baker from the types of protests that have taken place outside his house over the years, but the lawmaker acknowledged that it would apply to the governor and his family at a time when Baker has said he and his wife are weighing whether he should seek a third term in 2022.

“Once I saw what had been happening with the governor, I thought it was all the more reason to tighten up the language that we had started,” he said.

Baker’s office would not comment on Howitt’s proposal except to say the governor would review any legislation once it reaches his desk.

“It’s really sad the way people treat people in elected office,” Howitt said. “There’s a lot of discord in the country today and it’s also a matter of protection. You’re not going to please everyone all the time.”

Before winning a House seat in 2010, Howitt served in local government on both the planning board in Seekonk and the board of selectmen. He said he has not had anyone protest outside his house, but has received angry feedback from constituents and worries that bolder actions targeting elected officials could discourage people from seeking public office.

“It changes the dynamic of someone running if the family is brought into the mix, and the family should not be part of the mix,” Howitt said.

Because the legislation was filed in the middle of the two-year session, it has not yet been assigned to a committee or had a hearing scheduled, but Howitt said he’s looking forward to trying to advance the bill over the remaining months of the session.

“I think it’s a common sense piece of legislation. Now is it constitutional? That might be a question?” Howitt said.