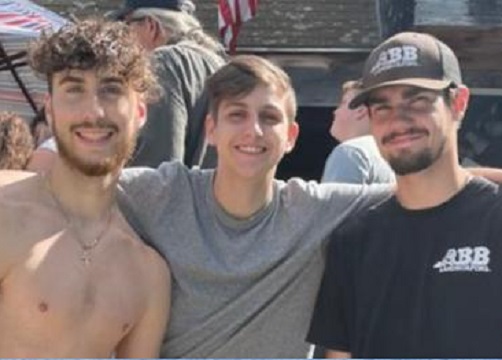 Three Massachusetts teens have been killed and another seriously injured after an early morning crash on Sunday.

At approximately 12:50 a.m., MSP patrols responded to the area of 40 East Brimfield-Holland Rd. for reports of a crash. Troopers arriving on-scene found a 2006 Nissan Sentra that had gone off the road and rolled over approximately 40 feet into the wood line.

Vincent J. Ardizzoni, 17 (officials initially reported him as 19), of Holland, believed to be the driver, and Shane M. Douglas, 18, of West Brookfield, sustained fatal injuries. The third fatality was a 17-year-old Oxford boy. MSP does not release the names of juveniles, however, friends and family have stated that Dominic Gardner is the 17-year-old from Oxford.

The fourth occupant, a 17-year-old Brookfield boy, fled the scene prior to Troopers’ arrival. Subsequent investigation determined he went to Harrington Hospital by his own means with serious injuries.

Those who knew the boys expressed the tragedy of a group of friends dying so young.

“We are going to be so incredibly lost without these boys and I am willing to do anything to help their families get through this. We love you boys. fly high and everyone please tell your family you love them and drive safe.”

A GoFundMe fundraiser has been created in their honor and has reached nearly $9,000 as of this writing.