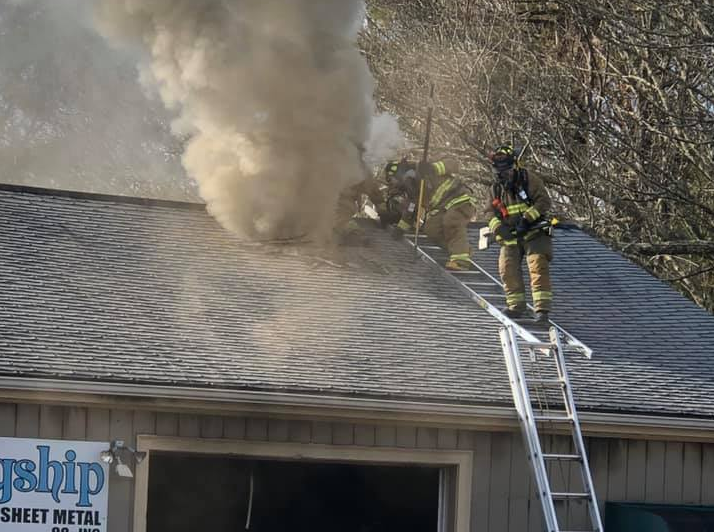 At approximately 12:10 p.m., Freetown Fire received a report of a fire 159 County Road, a large one-story mixed-use commercial building with multiple garage bays. The building was originally the first firehouse in East Freetown.

Upon arrival, firefighters saw thick smoke billowing from the rear of the building. Because of the size of the building and due to many renovations to the structure over the years, a second alarm was immediately struck and fire departments from Rochester, Lakeville and Dartmouth District 3 responded to the scene to provide mutual aid. Members of the Berkley Fire Department responded to provide station coverage.

Firefighters worked to quickly put out the flames and were able to get the fire under control around 1:45 p.m.

One man was inside the building at the time of the fire. He heard the fire alarm go off and then called 911 simultaneously as the department was receiving the alarm. The man was able to safely make it out of the building prior to the arrival of firefighters.

The Freetown Police Department responded and closed County Street between Washburn Road and the nearby roundabout intersection of County Road, Mason Road and Chace Road. The road has since been reopened.

The State Fire Marshal’s office also responded to the scene to assist in the investigation. The cause of the fire remains under investigation, however, at this time it does not appear to be suspicious.

About $500,000 worth of fire, smoke and water damage was done to the building. The building will not be usable for the time being.

“Thankfully no injuries were reported and we were able to quickly knock the fire down,” Chief Silvia said. “I want to thank our neighboring fire departments who came to assist us in putting out the fire.”

Providence Canteen 1 responded to the scene to provide water and refreshments for the first responders.