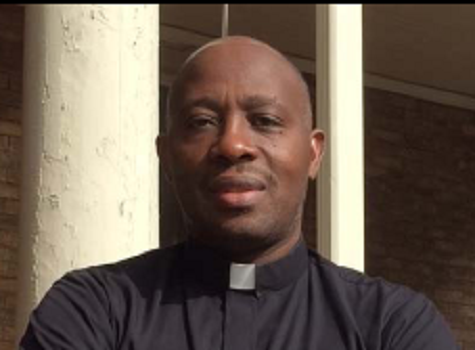 We recently learned that the Sacramento Center for African Peace and Conflict Resolution at California State University has chosen our own Fr. Leonard Kayondo as the 2020 recipient of their PEACE-BUILDER AWARD.

Each year, the Center presents the peace award to select individuals or organizations in recognition of their outstanding contributions to peace and conflict resolution in Africa or among people of African heritage.

Fr. Leonard joined the seminary at 14 years old to, as he said, “serve his community and I believed being a priest was the best way to serve the sick, serve children and young people.”

Fr. Leonard is a survivor of the genocidal violence that gripped his homeland of Rwanda in the mid-1990s. He recalls the tensions of the civil war, and in April 1994, while serving in a parish in Rwanda, Fr. Leonard answered the door one to day to a soldier asking for Fr. Kayondo. He was instantly aware that his name was on the Tutsi kill list. However, clearly the soldier didn’t recognize him. Fr. Leonard said he would go look for “Fr. Kayondo” and used this as a moment to escape sure death.

It seemed as though he would never return to Rwanda again. But, he did. In September 1994, two months after the violence stopped, he was able to return, determined to assist in the rebuilding of his nation with a focus on the poor, the marginalized, the youth. Upon assignment to a rural parish, he found that the parish house had been taken over by several families seeking refuge. Rather than displace them, he sough shelter for himself miles away. During this time, he organized food distribution, sought out an NGO to secure building supplies, and with the help of his community built 15 new homes for those needing shelter.

For the next 15 years, Fr. Leonard dedicated himself to rebuilding his divided community. He said, “In 1994, people were literally sitting on different sides, but everyone still came.” Daily he preached a message of peace and reconciliation. He told his parishioners, “There is on denying that people killed others, but it is time to end the violence and begin to live again.” The key, he said, was not his words, but that he was present to his community every day to talk and to listen.

During this time, he organized a children’s choir from both Hutu and Tutsi families. “They became a sign of hope and peace,” he said. He started a widows support group. He spearheaded a farming initiative eventually cultivating 12 acres of terrace gardens for the good of the community. He also worked with NGOs to provide families with goats and cows to sustain their livelihood.

Then he embarked on one of his greatest legacies – a soccer team! He created a community soccer team – The United Stars, now a national club team. The team was made up of members from all ethnic backgrounds, and especially at-risk youth who were known for fighting and dropping out of school. People of various ethnicities and faith backgrounds all came together for the first time since the genocide. It was more than soccer, Fr. Leonard said, “It was discipline, joy, exercise, an escape from the grief and isolation many youth were experiencing at that time.” He used this time to coach them in unity and teamwork. Over time, the children became friends, and eventually would begin to experience the same unity outside of the church that they experienced inside.

But, what Fr. Leonard is most proud of is the school he started in 1999. He challenged his dedicated youth group to help him begin a technical school where those with skills could teach one another and lift up the entire community. The space was small, the chairs were scarce, but Fr Leonard was overwhelmed to see how many young people showed up to start their own community school – and so the Saint Joseph Technology School was born. Today it continues to be sustained financially by a German family who came into contact with Fr. Leonard years later. The school is one of the largest in the region and graduates 180 students each year.

Today, Fr. Leonard continues his work for Rwanda though a Missionary Cooperative Program that fundraises for churches, schools, community wells for clean drinking water, and higher education in Rwanda. This includes scholarships for 10 young people a year who cannot afford college.

Fr. Leonard will be honored tonight (Saturday) in a virtual presentation of the 29th Annual Peace Awards.

We are so proud to today call him a member of our community here in Fall River and know that this is an honor much-deserved. Congratulations Fr. Leonard!! You are an inspiration to us all!

Fr. Tom Washburn
Rector at Cathedral of Saint Mary of the Assumption