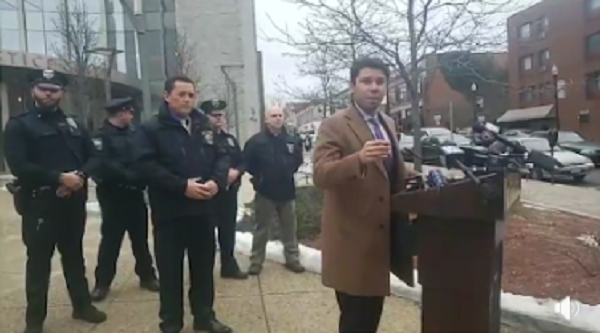 FALL RIVER – Police are searching for a thin, 6-foot-tall medium-complexioned man in his early 20s who is believed to be the main suspect in yesterday afternoon’s shooting in downtown Fall River.

Fall River Police Chief Al Dupere did not disclose many details about the ongoing investigation during a press conference with Mayor Jasiel Correia this morning outside the Fall River Justice Center.

Police have not yet made any arrests, and Dupere said detectives are still investigating to determine exactly how many people were involved and the nature of the altercation that led to several shots being fired around 1 p.m. Tuesday on South Main Street.

“This was not a random act. The suspect and the victim knew each other,” said Dupere, who added that the incident began as an argument between two men inside the courthouse. Dupere did not say if detectives know the identity of those individuals.

With several uniformed police officers behind him and the Fall River Police Department’s mobile precinct unit parked nearby, Correia announced that there will be an increase from two to four walking beat officers in downtown, and that the police department will be receiving extra money to increase its presence in city neighborhoods.

Correia also said he would be speaking with the Massachusetts Trial Court and the Bristol County Sheriff’s Department to increase security around the courthouse.

“When you have a situation like this, you want to respond as quickly as you can,” said Correia, who sought to send a message that Fall River is safe almost 24 hours after a shooting in front of the courthouse.

As attorneys and court staff were leaving the courthouse for their lunch breaks on Tuesday, the assailant shot several rounds at the intended victim in a foot chase that went down South Main Street toward the direction of Government Center. At least two parked vehicles and a law office at 70 South Main St., were struck with bullets.

There are no indications that the intended victim or anyone else was wounded by gunfire, Dupere said, adding that detectives will be in the downtown district today continuing their investigation.

Anyone with information is urged to contact the Fall River Police Department Major Crimes Division at 508-324-2796, or call the police department’s anonymous tips line at 508-672-TIPS.