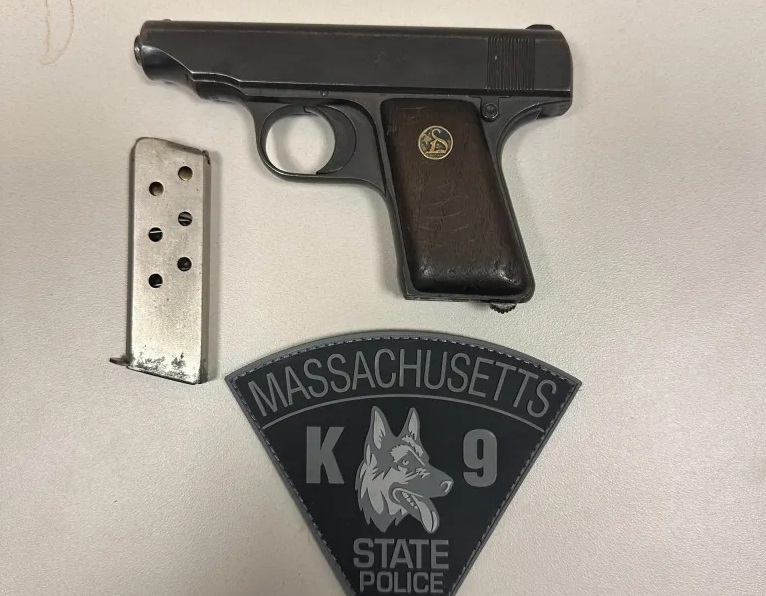 A Fall River man has been arrested after reportedly firing at a vehicle while on Route 24.

According to Massachusetts State Police, shortly after 10:15 p.m. on Friday November 18, Trooper Jacob Hass, assigned to the Massachusetts State Police K-9 East Team, responded to reports of a man that brandished a firearm from his vehicle and shot at another vehicle on Route 24 northbound in Fall River. Trooper Hass positioned his cruiser several miles ahead of this location and monitored traffic for the vehicle to pass his location. At 10:22, Trooper Hass observed the Nissan Altima pass him. He then entered traffic and attempted to catch up to the vehicle, providing his location with continuous updates, and awaited additional cruisers.

The Nissan exited Route 24 onto Route 44 and pulled into the parking lot of a gas station. At this point Trooper Hass immediately exited his cruiser and ordered the man out of his vehicle and onto the ground. Trooper Culver then arrived on scene to assist. The operator, identified as 26-year-old Ricky Lorenzi of Fall River, was taken into custody without incident while Troopers investigated the scene. After conducting a pat-frisk of the immediate area where Lorenzi was seated in the vehicle, Troopers located a loaded .25 ACP pistol.

While Troopers Hass and Culver were investigating this scene, Troopers Zachary Thomas and Grant Gadbois were interviewing the victim. During the course of their investigation, they observed damage on the victim’s vehicle consistent with that of the strike of a .25 caliber bullet.

Lorenzi was placed under arrest and transported to the Dartmouth Barracks for booking and continued investigation, including investigation conducted by members of the State Police Crime Scene Services Section.

Lorenzi was transported to the Ash Street Jail pending his arraignment at Fall River District Court on the charges of Illegal Possession of a Firearm, Possession of Ammunition without FID Card, Armed Assault with a Dangerous Weapon, Improper Storage of a Firearm, and Carrying a Loaded Firearm.