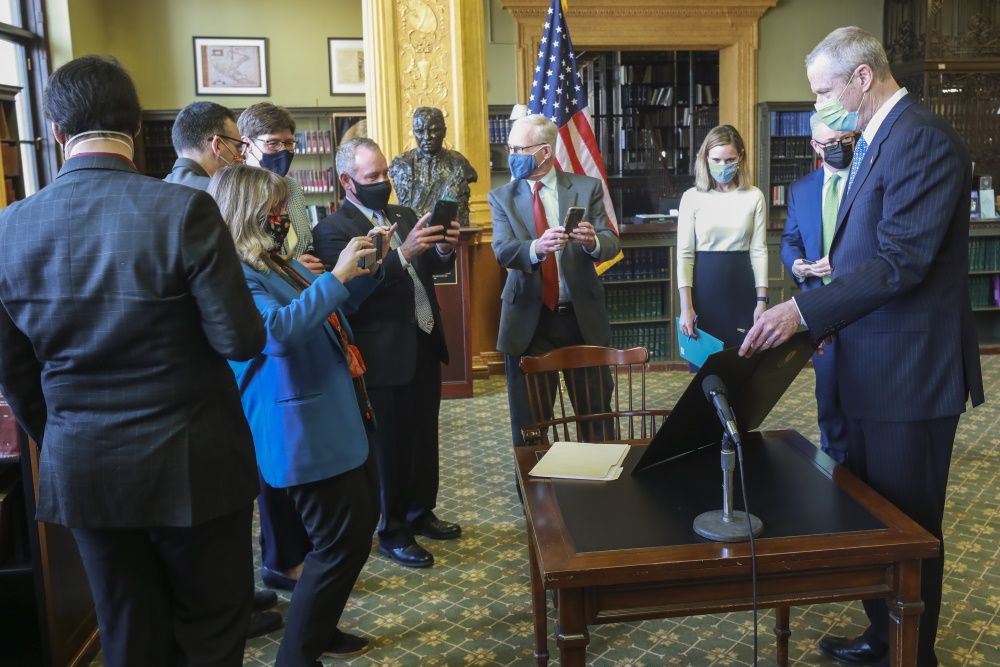 MARCH 26, 2021…..It took basically all of the last legislative session and the first three months of the new one to get major climate policy signed into law, but the real work begins now that Gov. Charlie Baker has put his signature on the law.

After it took a long, winding and sometimes contentious road, the governor on Friday afternoon signed the long-discussed legislation designed to commit Massachusetts to achieve net-zero carbon emissions by 2050, establish interim emissions goals between now and the middle of the century, adopt energy efficiency standards for appliances, authorize another 2,400 megawatts of offshore wind power and address needs in environmental justice communities.

“I’m proud to say that climate change has not been, ever, a partisan issue. We know the impacts on our coasts, on our fisheries, on our farms and our communities are real, and demand action, and that’s why we’ve been committed for over a decade to … doing the things we need to do to deal with the issue at hand and to maintain a structure that’s affordable for the people of the commonwealth,” Baker said after signing the bill in the State House library. He added, “This bill puts us on an ambitious path to achieving a cleaner and more livable commonwealth, while also creating economic development opportunities to support the initiatives.”

Sen. Michael Barrett, who led the negotiations for the Senate and said he is concerned that the Baker administration has tried to “evade legislative intent” of the new law, said Friday that everyone in state government now must start “pulling in the same direction” now that the work turns to implementation.

“The order of the day beginning tomorrow is ensuring interpretations of the law that are true to legislative intent and then overseeing implementation in a way that is true to legislative intent,” he said. “One reason I’ve been so concerned about the administration’s insistence on idiosyncratic readings of the new statute is because today’s abstract discussion segues over in tomorrow’s implementation. If the administration pushes back against the plain language of the law today, how are they going to implement it tomorrow?”

“We now have in place a path forward for robust climate action that will truly make a difference when it comes to tackling and reversing climate change in Massachusetts and beyond,” Deb Markowitz, state director of The Nature Conservancy in Massachusetts, said. “We are especially pleased that, for the first time, the new framework acknowledges the important contribution of natural and working lands — such as forests, farms and wetlands — to draw carbon pollution from the air.”

Massachusetts has the potential to remove one to two million metric tons of carbon dioxide equivalent from the atmosphere through natural climate solutions each year, roughly equal to the emissions from 435,000 cars annually, TNC has said.

The law also requires the executive branch to set interim limits for 2025, 2035 and 2045, and to set sublimits for six sectors of the economy — electric power; transportation; commercial and industrial heating and cooling; residential heating and cooling; industrial processes; and natural gas distribution and service — every five years. Each five-year emissions limit “shall be accompanied by publication of a comprehensive, clear and specific roadmap plan to realize said limit,” the law requires.

That work will begin almost immediately. The first interim plan required by the new law, the plan for 2025, must be in place along with the 2025 emissions limit by July 1, 2022. The bill also requires the Department of Public Utilities to consider emissions reductions on an equal footing as its considerations of reliability and affordability within 90 days, that the governor appoint three green building experts to the Board of Building Regulations and Standards, and that the administration establish the first-ever greenhouse gas emissions reduction goal for the home energy efficiency program MassSave.

Energy and Environmental Affairs Secretary Kathleen Theoharides said she stopped by her daughter’s room before driving to Friday’s signing ceremony to see if she wanted to join her mother to watch the governor sign a climate bill into law.

“She said, ‘So, why is that important? I thought you have to do something to stop climate change?’ and I said, ‘Yes, you do. But this is step one and we have a lot of work ahead of us,'” Theoharides said. “And so I really look forward to that work, that work we’re doing for all of our children and for the future of our residents here in the commonwealth.”

The law, through one of Baker’s amendments, newly requires the Department of Environmental Protection to conduct cumulative impact analysis as a condition of permitting certain projects to ensure that environmental justice communities — neighborhoods that are mostly made up of people with lower incomes and people of color that are at risk of being negatively and disproportionately impacted by environmental policies — no longer bear an undue burden of air pollution.

Offshore wind is becoming an increasingly important part of the state’s energy and environmental strategies and the new law requires that the executive branch direct Massachusetts utilities to buy an additional 2,400 MW of offshore wind power generation.

So far, Massachusetts lawmakers have authorized the procurement of a total of 3,200 MW of offshore wind power. The Vineyard Wind I and Mayflower Wind projects are under contract for a combined roughly 1,600 MW and the state is in the early stages of a third procurement, one that could fulfill the remaining 1,600 MW of authorization with a single project.

The Road to the Governor’s Signature

“I want to thank the governor for signing this bill today, a bill that has more miles on it than my car,” House Speaker Ronald Mariano said Friday.

Eighty-one state lawmakers rang in 2019 and the start of the current two-year legislative session by resolving to pursue a suite of climate policies, including moving the state to net-zero carbon emissions by 2050. The year brought youth climate strikes and clean energy pushes from municipal and business leaders but not, ultimately, completed climate legislation.

At the start of 2020, Gov. Charlie Baker, then-House Speaker Robert DeLeo and Senate President Karen Spilka all declared their support for net-zero carbon emissions by 2050 on the same day in January. But that shared goal, one that climate activists spent years clamoring for, was not carved into statutory stone until Friday afternoon.

The Senate overwhelmingly passed a package of climate bills in January 2020 and the House, which had earlier passed a $1.3 billion climate adaptation bill, in July 2020 passed its response to the main Senate proposal calling for net-zero carbon emissions by 2050.

Six lawmakers negotiated from early August until early January to strike a compromise between the House and Senate versions. That was passed in the final days of the last legislative session, so close to the end that Baker was left with only two options: sign the bill, or veto it.

Though he made clear that he would have preferred to send the bill back with amendments, Baker vetoed the bill. Lawmakers pledged to pass the exact same bill and did just that by the end of January. This time, Baker sent the bill back in early February with amendments he said would make the legislation more palatable.

Lawmakers then sat on the bill for a month as negotiations with the administration played out. The Legislature agreed to many, but not all, of Baker’s amendments.

Either way, both sides displayed a willingness to negotiate throughout the process and those talks got the bill to a point where both sides could claim some victories.

“This bill is a significant step closer to putting our knowledge about a foreseeable risk into action. This critical piece of legislation will help us seize major benefits for the commonwealth on our way to addressing an existential threat to our modern society and human life as we know it,” Sen. Marc Pacheco, one of the most vocal lawmakers when it comes to climate policy, said.

But the new law does not deal with the “climate emergency” aggressively enough, he said.

“That’s why as soon as this bill is done, we need to get about the business of putting in place the other elements that we need to be dealing with as a state, and working with our national governmental leaders and our world leaders to do everything we can to continue to move forward,” he said when the Senate re-enacted the climate bill on March 15.

Pacheco added, “Let us not close the door on this issue. Let’s make sure we kick it open for the future, that this is just our new beginning on a commitment to make sure we embrace a clean energy future. We’re on the cusp of a sustainability revolution, let’s embrace that clean energy revolution.”

Pacheco has filed a bevy of climate-related bills for consideration in the current session, including proposals to target retrofitting one million homes over the next decade and to create the jobs necessary to complete those retrofits (SD 2102).

“For all that last session’s bill will accomplish, a lot has been left on the table, and legislators will need to take further action on climate this year,” Ben Hellerstein, state director for Environment Massachusetts, said. “One policy that’s at the top of the to-do list: a bill championed by Rep. Marjorie Decker, Rep. Sean Garballey, and Sen. Joseph Boncore to transition our electricity, buildings, and transportation system to 100 percent clean energy.”

Former Sen. Ben Downing, who hopes to be the Democratic nominee for governor in 2022, shared similar sentiments Friday, saying that “[b]efore the ink is dry on the Governor’s signature, Massachusetts again finds itself behind.”

“For years Governor Baker and Massachusetts state government have approached the climate crisis with sluggishness and delay. That makes today frustrating. There is rightfully much to celebrate in this bill. But these are provisions that should have been the law of the land in Massachusetts long ago,” Downing said. “In the years ahead we have to accelerate our climate response in a way today’s bill barely imagines. That’s going to require state leadership — starting with a Governor — that understands we’re out of time.”