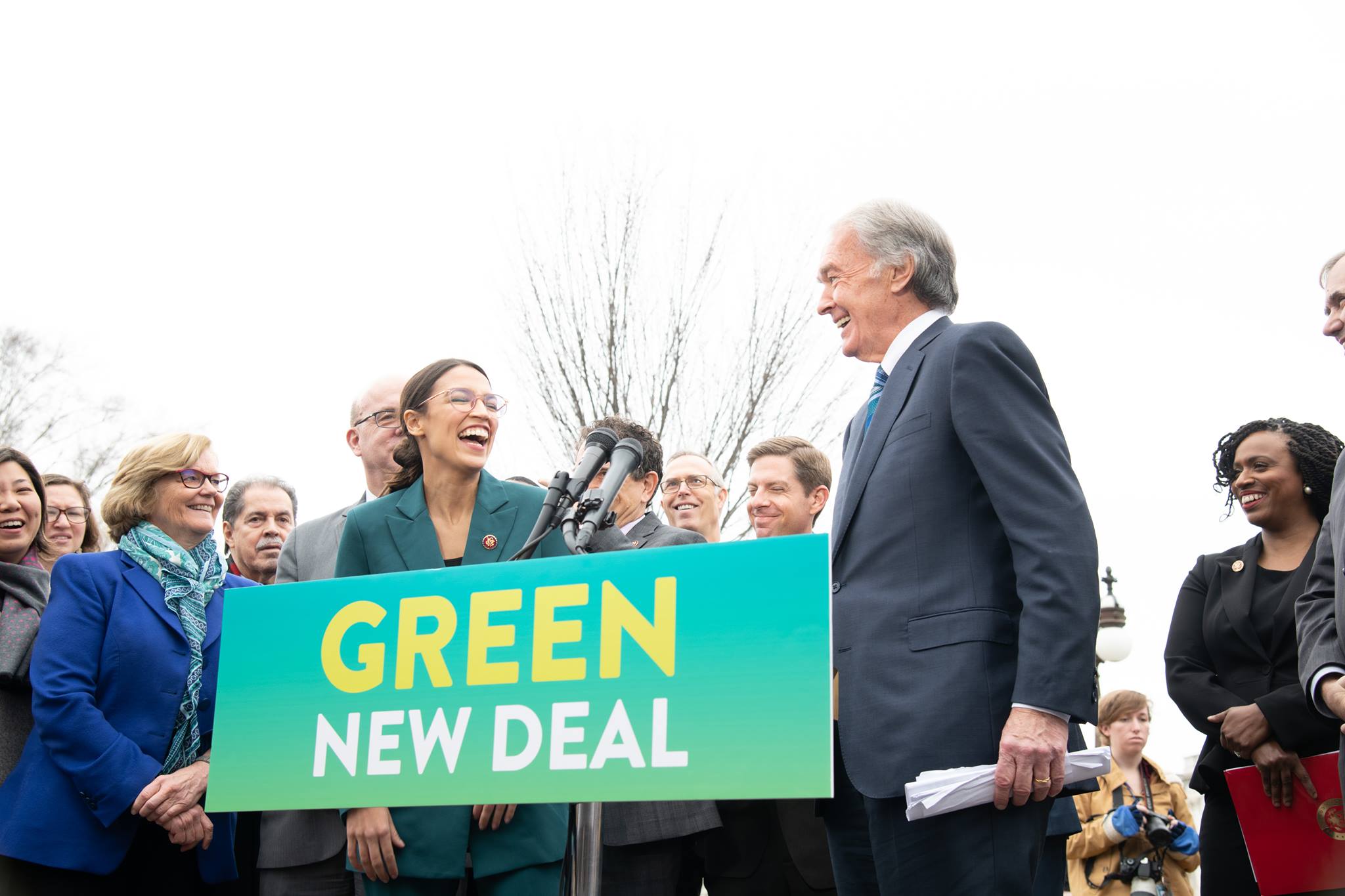 Senator Edward J. Markey (D-Mass.) and Congresswoman Alexandria Ocasio-Cortez (NY-14) Tuesday reintroduced the Green New Deal Resolution. The lawmakers announced the reintroduction, alongside co-sponsors and leaders from the labor, environmental justice and climate movements, at a press conference in front of the National Mall, a project whose renovation was funded in part by President Franklin D. Roosevelt’s New Deal.

“The Green New Deal isn’t just a resolution, it is a revolution,” said Senator Markey. “In the past two years, the Green New Deal has become the DNA of climate action, and the principles of jobs, justice, and climate action are now widely represented in legislation and state and local actions across the country. The Green New Deal provides the framework we need to confront the intersecting crises our country faces — climate change, a public health pandemic, racial injustice, and economic inequality. We can transform our economy and our democracy for all Americans by addressing the generational challenge of climate change. We have the technology to do it. We have the economic imperative. We have the moral obligation. We just need the political will.”

“The Green New Deal has three core components: jobs, justice and climate,” said Rep. Ocasio-Cortez. “The dozens of bills that have sprung from this resolution since we introduced it two years ago all contain 1) a commitment to creating good-paying union jobs; 2) prioritizing frontline and vulnerable communities disproportionately affected by climate change – including communities of color, indigenous land, deindustrialized communities and fossil fuel hubs; and 3) reducing greenhouse gas emissions from human sources by 40 to 60% within 10 years and net-zero global emissions by 2050, in line with the Intergovernmental Panel on Climate Change’s finding that global temperatures must not increase more than 1.5 degrees Celsius above pre-industrialized levels in order to avoid the most severe impacts of climate change.”

According to Markey, in the two years since the Green New Deal was first introduced, lawmakers in both chambers of Congress have continued to introduce more than a dozen pieces of legislation across multiple sectors of the economy that build upon the principles from the resolution.

“In 2019 we made it our mission to pass a Green New Deal. Three years later, we are still facing the ticking time bomb of the climate crisis, but now alongside the highest levels of joblessness since the Great Depression,” said Varshini Prakash, Executive Director of Sunrise Movement. “We are in a civilization altering moment in our history and it’s time for America’s political leaders to muster the courage and moral clarity to pass the Green New Deal, launching America’s biggest job creation program in a century while combating climate change. At a crucial moment like this, politicians have a choice to make: they can heed the call demanded by science and justice to build back better through a Green New Deal, or they can cower to the fossil fuel industry and force us down a path of destruction, towards the fires that burned our homes to rubble and the floods that took our family and friends with them. Young people have made our choice clear – and now we demand politicians join us by passing a robust Civilian Climate Corps and ushering in the decade of the Green New Deal.”

“Climate change is already a threat to Flight Attendants’ safety at work,” said Sara Nelson, international president of the Association of Flight Attendants-CWA. “Extreme turbulence is becoming more common and more dangerous, while extreme heat and cold threaten our safety at home and the ability to operate at work. Weather events are disrupting more flights and shutting down airport infrastructure altogether. Inaction is not an option. The Green New Deal and Civilian Climate Corps would address the concurrent emergencies of the climate catastrophe and runaway inequality. We can protect our planet and create millions of good, union jobs at the same time. We can’t afford to wait.”