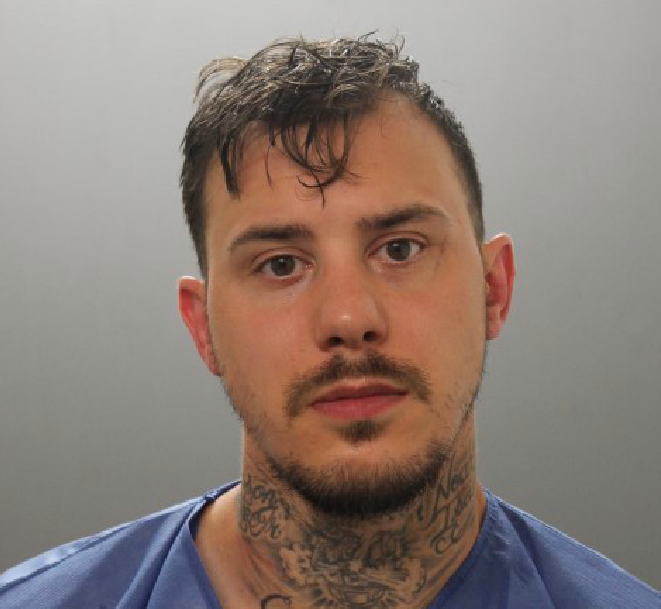 Police arrest a man Monday that had just recently been released from prison.

According to West Warwick Police, on Monday, at approximately 8:00 p.m., a West Warwick Officer attempted a traffic stop on a vehicle that had an invalid registration and was driving erratically. The vehicle refused to stop and a short pursuit occurred on Pontiac Ave. The pursuit was terminated by the officer seconds later.

Soon thereafter, the officer came upon an accident at the intersection of West Natick Road and Pontiac Avenue, where the same vehicle had struck a light pole. The officer observed the driver of the vehicle involved in the accident, running toward a nearby Extended Stay Hotel. The officer then pursued the driver on foot. The driver entered the hotel, ran through the hotel lobby and then ran out the back door into a wooded area. The officer lost sight of him, but a perimeter was set around the area with the assistance of the Warwick and Cranston Police.

It was later determined that after running into the wooded area, the driver had entered a swamp that is behind the West Warwick Sewer Plant and swam away from the police. He was able to come out of the wooded area on New London Ave, near Oaklawn Ave in Cranston, approximately 30 minutes later. He was spotted by a West Warwick Officer and another foot pursuit occurred. He was quickly apprehended without further incident.

The driver was identified as 32 year-old Jayson Shute of West Warwick. Shute had just been released from prison in Massachusetts after serving time for an alleged Westport home invasion.

Shute had several warrants in Rhode Island, including a felony warrant for 2nd degree child abuse. Drugs were located inside Shute’s vehicle and he was driving on a suspended license.

Shute was arraigned at the Kent County Court House the next day on charges of Reckless driving/eluding, Obstructing an officer, Possession of scheduled drugs I-V, Operating on a suspended license 3rd plus offense, two District Court bench Warrants and one NCIC Superior Court warrant.