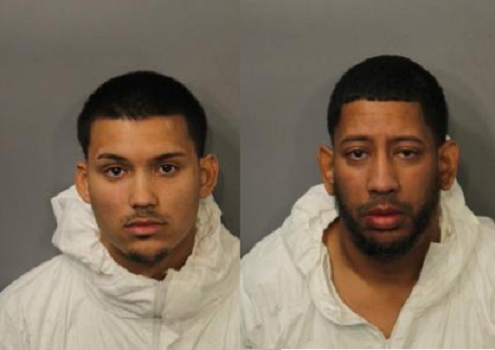 Fall River police have arrested two in regards to a shooting in the city on Tuesday night.

According to Captain Daniel Dube, at approximately 9:30 p.m., patrol units responded to the Bradford Avenue side of Kennedy Park regarding a female with a gunshot wound to the head.

Upon arrival, officers located a vehicle with 2 females. The operator had a gunshot wound to the left side of her head and the passenger had gunshot wounds to both her legs.

Both females are listed in stable condition, according to Dube.

Detectives from the Major Crimes Division responded to the scene and began an investigation. The investigation revealed the shooting took place in front of 372 Mulberry Street.

Located at the scene were 2 suspects who were subsequently placed under arrest. Additionally, 14 shell casings were located in front of the Mulberry Street location. Major Crimes Detectives are continuing the investigation.

Joshua Burgos, 21, and Elvis Burgos, 40, both of 372 Mulberry Street, were arrested on charges of Armed Assault with intent to murder, and Discharge a firearm within 500 ft. of a building.