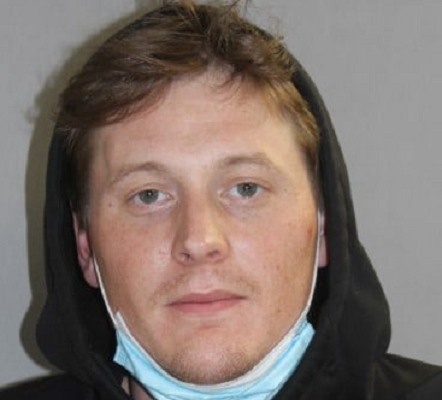 A local man has been arrested on both an outstanding warrant and a bank robbery.

According to Falmouth Police, at approximately 2:55 p.m. Monday afternoon, the Falmouth Police Department responded to a bank robbery at the Martha’s Vineyard Savings Bank on Palmer Avenue in Falmouth. Witnesses stated that a lone male suspect fled on foot with an undisclosed amount of money.

While searching the surrounding vicinity, Officer Thomas Maguire saw a man emerging from the woods near Depot Ave. Officer Maguire encountered the man and identified him as Michael McLane, a 31-year-old man from Assonet, MA. Officer Maguire discovered that McLane had an outstanding arrest warrant and placed him under arrest. McLane struggled with Officer Maguire, but the Officer was able to restrain him without injuring him until other Officers arrived to assist. Once McLane was placed into handcuffs and brought to his feet, he suddenly struck Officer Maguire with a head-butt.

Subsequent to the arrest, the continuing investigation uncovered evidence that linked McLane to the bank robbery.

Michael McLane has been charged with Unarmed Robbery, Larceny, Assault and Battery on a Police Officer and Resisting Arrest.

The Falmouth Police Department was assisted in the investigation by the Barnstable County Sheriff’s Office, The Massachusetts State Police, and the FBI.

In July of 2014, McLane was accused of robbing the Santander Bank on South Main Street in Freetown.